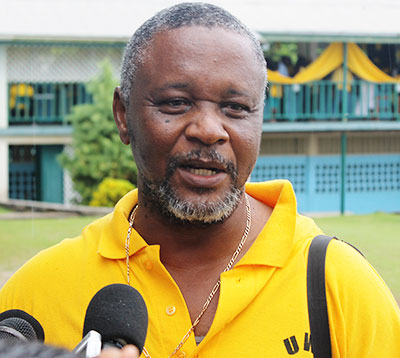 NATIONAL Security Minister Hermangild Francis is expected to field some tough questioning about fighting crime when he addresses a meeting of the Chamber of Commerce, Industry and Agriculture tomorrow.

Francis will be the guest at the Chamber’s Executive luncheon which takes place at the Coco Palm Hotel.

According to the Chamber, crime and breakdown in law and order places significant increased burdens on the cost of doing business in a country. With increased crime, and lawlessness firms find it imperative to increase their spend on protecting the business and property.

The Chamber argued that more security guards, burglar bars, loss prevention systems, security gates, increased lighting, security doors and locks, insurance costs to name a few become part of a modern business expenses. Added to that staff were severely affected when they become victims of crime, be it personal or property, leading to loss of hundreds on man hours on the job.

The Chamber of Commerce said it recognized the important challenge facing its members and as such has kept law and order high on its agenda of areas where government must take assertive action to ameliorate the current situation on the island.

Noting that the Minister of National Security was charged with leading government’s efforts to ensure a safe and secure business and living environment in St. Lucia, the Chamber said the business community must continue to play its role in protecting its staff, property and business interest to ensure continued sustenance.

It said: “Clearly working in tandem with government leverages the use of resources and more importantly makes each other work a lot easier”.

The Chamber said that at this critical time, it had asked the Minister of National Security to outline government’s plan to fight crime and to reduce the rampant lawlessness in the country as well as the ways in which the public and private sector can help each other and what were the needs of the private sector to make their own rapidly expanding concerns easier to address.