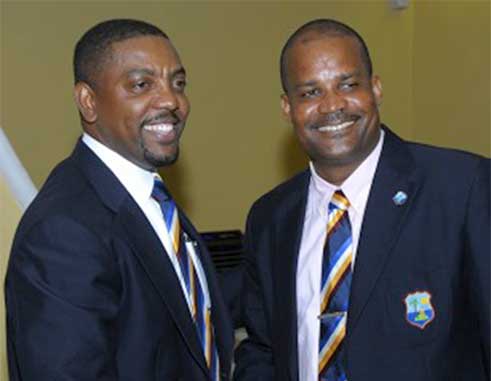 ALMOST four years to the date, Whycliffe ‘Dave’ Cameron and Emmanuel Nanthan were again elected President and Vice-President respectively of the West Indies Cricket Board on Sunday, March 26.

The unanimous decision was taken by all 12 of the cricket delegates of the region. Cameron and Nanthan were the only two nominees for the posts this time around.

The pair was first elected on March 27, 2013 and at that time they had opponents. Four years and two elections later, the team has managed to make some strategic changes and adjustments. Among them, one of the most important, was maintaining a surplus for two consecutive years; the year which ended September 30, 2015, the Board reduced its accumulated deficit and ended with a surplus of US3.4 million. Last year, a surplus of US$3.5 million was achieved with an accumulated surplus of US$1.578 million.

Cameron noted in his report to the Annual General Meeting that “we cannot over- emphasize the need for financial stability in cricket as without that kind of stability, all the other development plans cannot occur.” The President added that despite the tighter financial management, “the board has invested in more development tours and the addition of the A Team tours is an example.”

Another important achievement is the fact that the WICB has managed to achieve best practices by producing audited reports within the given time for the past three financial years. Cameron praised the Audit Risk and Compliance and the Finance Committees for the tidy work they have done throughout the period.

The region will be hosting the Women’s World Twenty20 Championships in November 2018 and there is a comprehensive programme which is being put together as the women will try to defend their World Twenty20 title.

Cameron has advised that a public relations strategy will be deployed so that all West Indians can rally around our WI Women’s Team as they seek to defend their title on home soil.

“It will be a big event and we need all hands available to help as we seek to raise the profile of women’s cricket in the region, have a successful tournament and a win for our women’s team,” he said.

The Women’s team will also be looking to win their first World Cup in the U.K. later this summer and all plans are in place to achieve this with the regional women’s competition being played in April in Saint Vincent and the Grenadines.

In moving forward, Cameron and the team will have the new strategic plan which will facilitate improved performances at the regional and international levels and explore a more robust governance system. The strategy revolves around the rebranding of Cricket West Indies, the development of its commercial arm – Windies Inc. — and the creation of a development foundation to finance cricket development in the region.

This was presented at the Board of Directors and Annual General Meeting in Barbados on Saturday and Sunday, March 25 and 26.