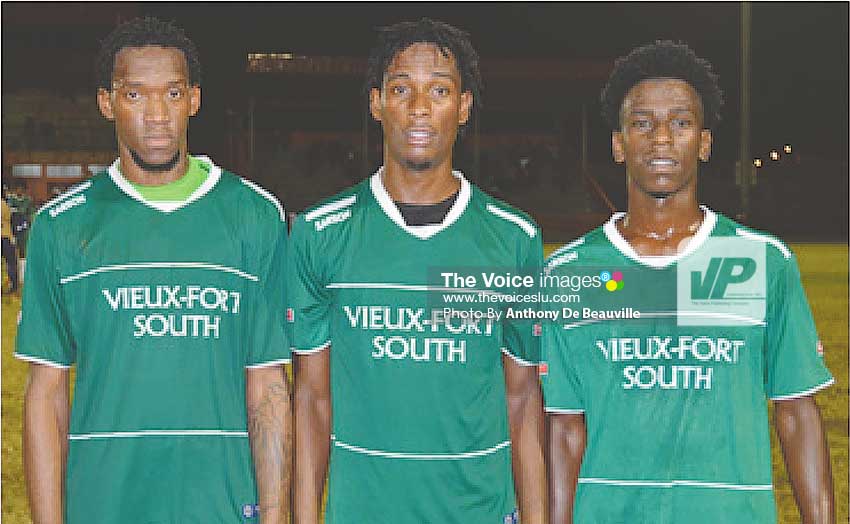 IT’S a busy weekend for the Vizions Entertainment/SLFA Super League as Central Castries and Roseau Valley start their campaign in Group 1 from 4:00 p.m. today at the Desruisseaux playing field. In Group 2, Vieux Fort North take on Laborie at 6:00 p.m. at the same venue. Vieux Fort South face Soufriere from 8:00 p.m at the Phillip Marcellin Grounds.

The La Ressource playing field has recorded the biggest crowd to date in the tournament and this evening will be no exception as that venue will host its final round of matches. From 6:30 p.m., Group 4 matches will see Dennery playing Micoud and Mabouya Valley taking on South Castries at 8:30 p.m.

Tomorrow, Desruisseaux will host Babonneau for their 4:00 p.m. clash. La Clery play Gros Islet at 6:00 p.m. at Soufriere Mini Stadium and Mon Repos take on the National Under-20 team from 8:00 p.m. at the same venue.

Last Thursday, the La Ressource playing field hosted the first of a double-header as South Castries took on defending champions, Micoud. Micoud needed a win to stay alive, but the 0–0 scoreline at the halftime whistle appeared worrisome for their technical staff.

On the resumption, the defending champions came out firing. In the 60th minute, Levi Altidore gave his team a 1-0 advantage. He scored again in the 68th minute and Salim Joseph in the 75th, Kerlan Malcolm in the 84th and Shane Paul in the 90+3 minutes, qualifying the team for the next round of competition. Micoud won 5-0.

In the second encounter of the night, home team Mabouya Valley defeated a formidable Marchand team 2-0. Marchand needing a win to stay a live would have themselves to blame for not capitalizing on the scoring opportunities resulting in the first half ending 0 – 0.

The second half was even more intriguing with more chances for both sides. Mabouya Valley nosed ahead in the 84th minute when Marchand conceded an own goal by Ferguson St. Clair who headed the ball into his own net to give Mabouya Valley a 1-0 lead.

The action continued last Wednesday at the Phillip Marcellin Grounds in Vieux Fort with a double-header as both Canaries and Vieux Fort South were in winners row over Mon Repos and Anse la Raye respectively.

Canaries scored their first goal in the 20th minute, a brilliant strike by Stephen Longville to leave the half time score 1-0 despite both teams squandering their many chances.

On resumption, captain Dwayne Jn. Baptiste put his team further ahead in the 59th minute and that’s how the score-line remained until the final whistle.

Following a 1-1 draw in their previous game against La Clery at the PMG, Vieux Fort South were looking to get back to winning as the coaching staff headed by Emmanuel Belasse made four changes to its starting line-up.

From all indications, the game plan paid off as Gregson President, who came back into the team after missing out due to a red card in a previous game, got his team up and running. He scored in the very first minute of play. With 1 goal up, Vieux Fort South was firing on all cylinders as they looked to take advantage. Ansela Raye, on the other hand, despite several goal raids by VFS, were still able to hold their own at the halftime whistle with the score still 1-0.

On the resumption, and despite a persistent drizzle, prolific scorer Antonio Joseph made life difficult for the visitors when his right foot shot in the 56th minute made it 2-0.

VFS substitute Ricardo Miller put his team further ahead in the 79th minute while in the 80th minute Anse la Raye captain Rickson Augustin was handed a red card after receiving his second bookable offence on the night. With a one-man advantage, VFS’ Antonio Joseph’s 92nd minute strike made it 4-0 to take charge of Group 2 with 6 points from three matches: two wins and a defeat.

Also on the night, this time in Soufriere, the National Under-21 Team defeated Laborie 1-0, a goal scored by Nangee Phillip while La Clery, following their drawn game against Vieux Fort South, defeated home team Soufriere 2-1. For La Clery, the goal scorers were Renaldo Emmanuel and Travis St. Pierre while Craig Joseph was Soufriere’s lone scorer.