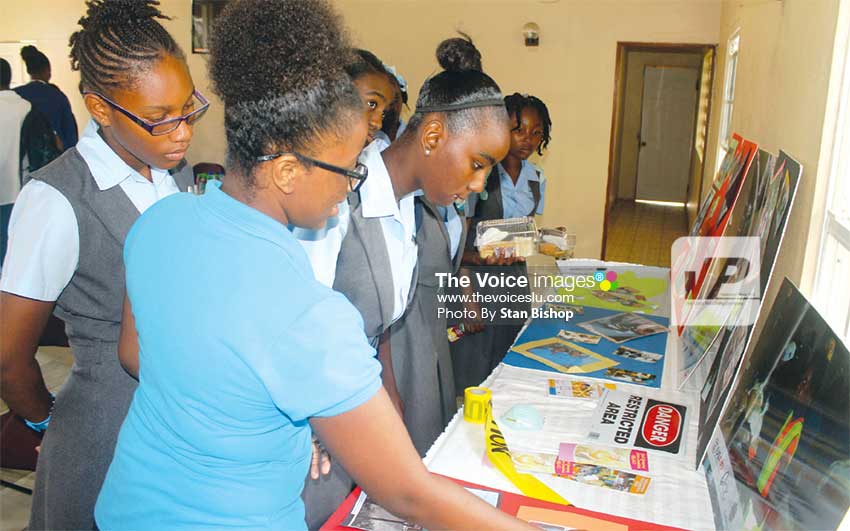 ANOTHER challenge has been issued to young people to become part of initiatives that not only help in their own development but also that of their communities.

Recently, the Youth Emergency Action Committee (YEAC) held an informational session at the Pastoral Centre at Bois d’Orange to give some insight into its operations, which involve preparing the youth with the skills needed to respond to emergency situations, including natural disasters.

Since its inception in September 2011, YEAC, which comprises nearly 50 members from the Forestiere, Marchand and TiRocher communities, has been familiarizing its members with the skills necessary for responding to natural and man-made disasters, all in an effort to minimize injury and reduce loss of property. The group is an affiliate of similar YEAC units in Jamaica, Grenada and the Dominican Republic.

Nearly 50 students from three Castries-based secondary schools attended the informational session at the invitation of YEAC, the main objective being that the students would join its ranks and become part of an organization that aims at promoting volunteerism. The group won the award for Outstanding Religious Youth Group at last year’s National Youth Awards.

Marcia Haywood, Regional Coordinator for CARITAS Antilles, said that in a society where the youth are usually seen as contributing negatively, YEAC members demonstrate that there is a difference being made albeit on a small scale.

“I’m very proud, especially being a founder of this group,” she told The VOICE. “I’m also proud to see young people who have worked on character development in order to host such an exercise from the start to be able to do something positive for themselves and society as volunteers in their respective communities.”

Haywood said there was no limit to membership and that the group remains committed to being able to reach young people throughout Saint Lucia. Presently, the focus is on having YEAC members in every community. As such, the invitation for new members is being extended to schools, youth on the block, particularly youth who have fallen through the gaps. However, youth who are already part of another organization might want to take this on as another activity.

While the YEAC has had some success in attracting young people to the organization, one of the challenges has been retaining them. Haywood said the loss of members has been difficult for YEAC due to competing activities or members probably no longer feeling a sense of purpose. For those who have stayed, she said, the growth has already begun to show.

“They might have felt that our programme was too rigorous and there was too much discipline involved, which they might not be used to. However, we’ve worked with various types of young people who have had diverse experiences. Some would see the value of what they’ve learned and that’s the hope we have. It’s like planting a seed and being unsure about how it would absorb the nutrients from the elements and grow into a big tree or small tree. So our hope is to inject those values and principles into young people but we are not certain about how they would receive and retain it.”

Sponsors for YEAC include Caritas Antilles, Catholic Relief Services, Digicel and USAID and the group works with organizations such as the St. Lucia Red Cross, St. John Ambulance and National Emergency Management Office (NEMO) to foster strategic partnerships to acquire the expertise from those organizations that are already versed in the required training.

During the recent exercise, many students expressed an interest in joining the group, which seemed encouraging to Allister Phillip, YEAC’s Project Manager (Saint Lucia), who said the exercise was aimed at piquing the students’ interest. Follow-up meetings and presentations with school principals and students and invitations to YEAC’s activities are also being planned, she said.

“It was very encouraging to have so many students participate in the session,” she told The VOICE. “It’s definitely a stepping stone in our development. Preparation for an emergency is key and whatever training we can possibly expose them to, we will. We just need other stakeholders to become part of what we’re trying to do.”

Phillip said she has witnessed the transformation of current members being very vocal and confident, including the group’s president and public relations officer, who have had learning and growing experience in motivating others. She believes the group’s positives appeal to any young person wanting to make and be a difference.

“That’s the best type of marketing ever: having young people influencing others to do something positive,” she said.

For more information about YEAC, go to their Facebook page or call Phillip at 287 – 8014.