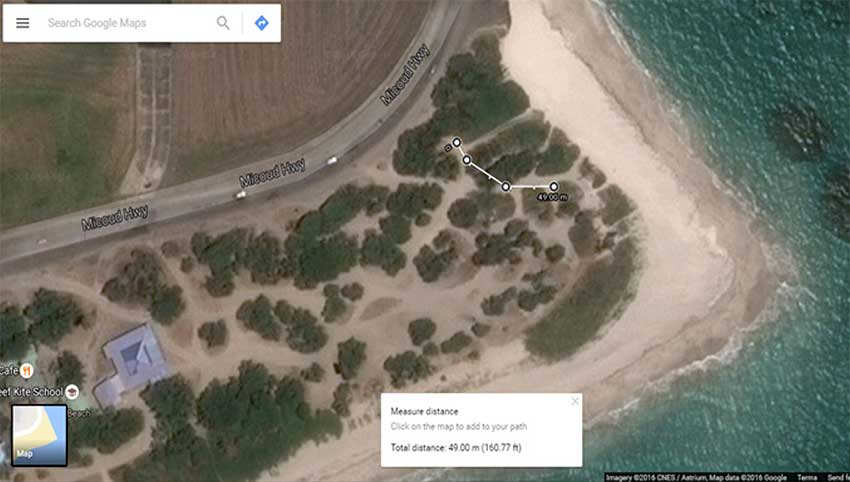 THE Saint Lucia National Trust (SLNT) will begin implementing coastal/beach rehabilitation measures in the next two weeks. A major component of this is an intense beach re-vegetation exercise along the Pointe Sable (Sandy) Beach in Vieux Fort. This is one of a suite of measures being undertaken to continue to improve coastal stabilisation along the Anse du Sable beach strip within the Pointe Sable Environmental Protection Area (PSEPA).

However, in preparation for this exercise, a physical barrier of approximately 49 metres in total length will be installed and will comprise a series of 4 foot lengths of wooden poles spaced approximately 3.5 feet apart. The barrier will be at least 20 metres away from the main road at the south-eastern end of the Hewanorra International Airport runway and angled almost perpendicular from the main concrete road unto beach side (see image representation at left).

The main purpose of installing the barrier is to restrict vehicular access to the near shore areas of the beach which have been targeted for re-habilitation. Pedestrian access to the beach will not be affected by the barrier. These recommended solutions were presented to, discussed and approved by representatives from key agencies, including the Office of the Commissioner of Crown Lands; the Vieux Fort Town Council; the Ministry of Infrastructure; the Ministry of Economic Development, the National Conservation Authority (NCA), and the Saint Lucia Air and Seaports Authority (SLASPA). The barriers will also complement beach tree-planting exercises targeting both sites.

Coastal communities have become increasingly vulnerable to the threat posed by sea level rise and storm surge due to a combination of climate change effects and unsustainable human activities such as sand mining; removal and destruction of natural barriers (sand dunes and coastal vegetation); and beach surface hardening as a result of unregulated vehicular movement.

This component of the coastal stabilisation works was made possible through an OAS funded Sustainable Communities project which is aimed at, among other things, improving the resilience of coastal communities. The project had multiple objectives for improving the sustainability of Vieux Fort’s coastal communities, coastal resources (including Pointe Sable Environmental Protection Area), local livelihoods, human health and nationally-significant economic infrastructure in the south of Saint Lucia. Although the project has four core components, at this time the focus is on building resilience to natural hazards in the face of coastal erosion.

The Trust noted that local awareness of these issues were heightened following the impacts of the Christmas eve trough of 2013 which caused the Vieux Fort River to overflow its banks and, together with the associated storm surge, caused flooding of local homes and communities, businesses, the airport and significant damage to major road infrastructure. Thus, the project responds to community concerns about the potential for a repeat of the impacts of storm events, and leverages community interests to seek solutions for adaptation and hazard reduction through targeted interventions which include:

Taken together, these interventions constitute an integrated approach to addressing coastal erosion and increasing resilience of Sandy Beach area. In addition, the measures will also support sustainability of the eco-tourism and livelihood based activities derived from the use of the unique natural elements of the area, the Trust said..