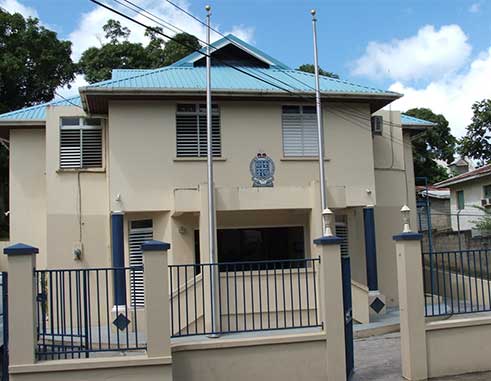 THE newly-elected executive of the Police Welfare Association (PWA) had a sit-down with members of the media on Thursday, promising to dive in head first to fix the many internal issues plaguing the Royal St. Lucia Police Force.

The new executive was elected on February 27.

Chicot thanked the members of the media for their attendance following a short opening prayer by the PRO, and expressed his high hopes that the relationship between the association and the media would become a fair and balanced one.

“We call upon you the press to not only highlight the negatives of the organization as we at the PWA seek to bring out positives,” Chicot said. “Too many times when the welfare association is approached by the media, it’s always on a developing story where the police seem to have found themselves in hot water. But I can assure you that when the good things are happening in the RSLPF, you will be called upon so that the people of St. Lucia could know.”

Chicot said there were many issues plaguing the organization, including insurance for police officers, especially motor allowances and insurance, where drivers are usually made to pay for any damages to vehicles involved in accidents.

He said the PWA would also tackle the issue of officers who leave the Force with no benefits, health issues and seek to secure designated locations at the main health institutions for officers in need of medical attention.

Chicot said: “The Police Welfare Association will spare none (and) will tackle these issues head-on. These issues will not be allowed to continue to sit as plagues in the organization.”

He continued: “We will fight for quality working conditions for our officers and we will look to increase our presence in the PWA so that our members, instead of calling it welfare, at some point in time they will call it ‘well care’”.

He also tackled the rocky history that has existed in the public eye for years between the PWA and the RSLPF hierarchy, saying he hoped that the bad blood of the past had ended and that the relationship moving forward would be more cordial.

“It’s a new executive and as anything, we are not looking to be in any contention with our hierarchy, but will look to work in unity with them as we look forward to push our agendas,” Chicot said. “We are calling for unity among all our members, lower ranks, managing room and the executive ranks. So we will meet the executive and we will sit with them and have a long and healthy discussion. Whatever we fight for, we will do it together, and what we cannot do together, we will do it on our own.”

The new executive said they will also take aim at changing and creating new legislation by writing to National Security Minister, Hermangild Francis, to arrange a whole day sit-down to present him with the issues they face.