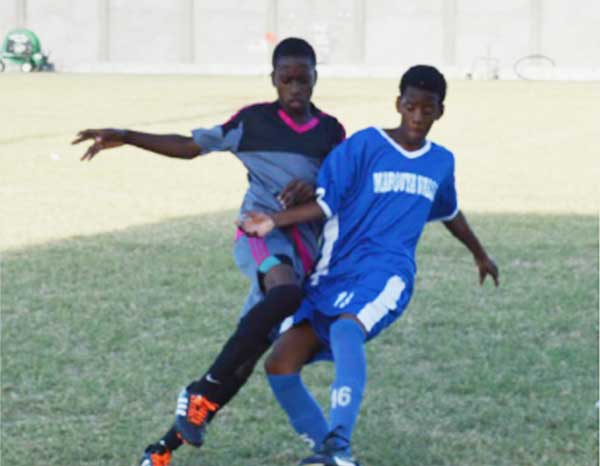 MABOUYA Valley and Canaries have now joined Gros Islet in booking their spots in the semifinals of the Saint Lucia Football Association/Saint Lucia Sports Online Under-15 football tournament.

Mabouya Valley had an easy 4-0 win over Roseau Valley at the Phillip Marcellin Grounds in Vieux Fort on Saturday.

Canice Sonson put Mabouya Valley in the lead early with a goal in the 3rd minute. Peter Alfred doubled the lead when he scored in the 14th minute, adding more woes to Roseau when he scored his second and the Valley’s 3rd goal in the 30th minute to keep the score 3-0 at halftime.

On the resumption, Brendon Sandiford sealed the deal for Mabouya Valley when he scored the fourth goal in the 55th minute.

On Sunday, Canaries earned a hard-fought 3-1 victory over Micoud, also at the Phillip Marcellin Grounds.

Canaries took the lead in the 26th minute with a goal from Vaughn Longville. In the second half, Micoud got their hopes up when Kishawn James converted in the 47th minute from the penalty spot.

Canaries won a corner kick in the 82 minute which allowed Rio Longville to out-jump the Micoud defenders and take a 2-1 lead.

With the clock ticking and Micoud pressing on with their attack, they found all their players in the Canaries half. Canaries then capitalized on a counter-attack and Steven Octave out-ran the defenders from the halfway line and neatly placed it away from the keeper. The 89th minute goal sealed the deal for Canaries as they advanced to the semifinals.

The last quarterfinal game of the tournament takes place today when host Vieux Fort South come up against Marchand from 5:00 p.m. The match will be followed by a senior friendly between Vieux Fort South and Desruisseaux as the teams prepare for the Vizions Super League knockout tournament scheduled to kick off on April 8.