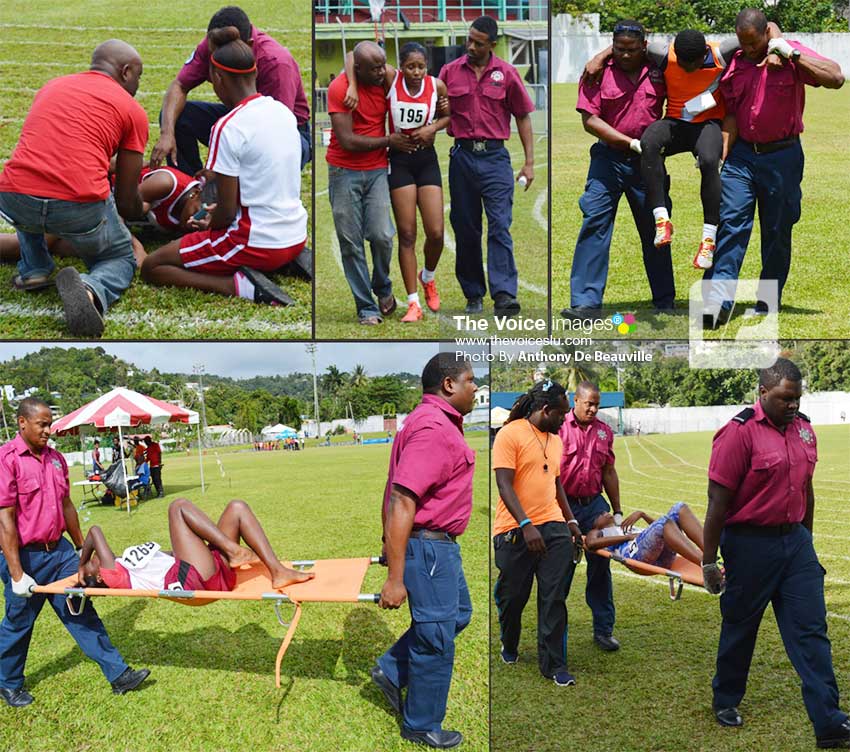 THE final day of the Inter-Secondary Schools Northern Zone qualifier at Mindoo Phillip Park on Wednesday proved challenging for the athletes as far as injuries were concerned.

Despite intermittent showers throughout the meet and the excitement, various instances of medical personnel running onto the field to assist students who had collapsed soon became the main concern.

The medical personnel told The VOICE that it was the first time they had seen that many student athletes collapse after crossing the finish line and, in some cases, during races.

At Tuesday’s meet, the medical personnel on hand included one nurse, three officials from the Saint Lucia Fire Service (Emergency Medical Service) and three from the Saint Lucia Red Cross. They attended to two spike injuries, five panic attacks, seven exhaustions, two cramps and six hamstrings injuries. One student was taken to hospital following an asthma attack and another three had to be administered with oxygen.

On Wednesday, the combined medical team was kept busy as they attended to 14 hamstring injuries, one case of overeating, one sprained ankle, two asthmatics and shortness of breath while two individuals had to be treated for headache.

Last week at the Southern Zone qualifier, there was a combined twelve cases on each day, mostly from exhaustion, two asthmatics and two with other injuries that were aggravated during the games.

The medical personnel in the southern zone said other cases they attended to were worrisome as some of the young girls were not eating properly, a similar situation they have noticed in the northern zone.

Earl Agdomar of the Saint Lucia Red Cross said: “The athletes need to be drilled on eating properly, and training properly so they can last for those days ahead. Drink enough fluids, water preferably, and warm up properly before and after the event because based on what I have seen to date, with two days left it’s definitely going to be exhausting as the students from the various schools will be going all out to make it to the grand finals.”