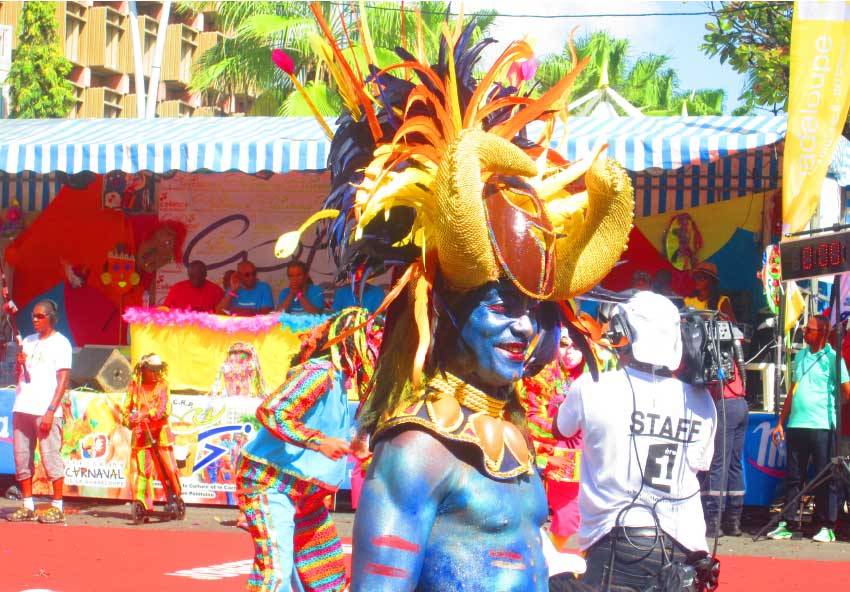 AFTER five weekends of communal carnivals island wide Guadeloupe’s Carnival finally celebrated the traditional black and white street parade in Pointe a Pitre climaxing with the ritualistic burning of Vaval La Generale on Ash Wednesday evening amid tears and jeers.

Notwithstanding last Saturday morning’s masquerade, which is like the Jour Ouvert, this segment of the Carnival consists of the use of body paint, flowers and fauna without the use of the whip. The accompanying music is mainly chanting above the African drums.

Later on in the late Saturday afternoon, the Junior Carnival, bristling with briskly coloured faces, winds its way along the official parade route, accompanied by compulsive drummers, we see and hear the cracking of the whip by the young revellers ranging in age from two to fifteen.

The effervescent entertainment moves to La Place de la Victoire, to the live sounds of Konpa music which captivates audiences until the eleventh hour. Island wide, in total more than 250,000 people enthusiastically participate as spectators lining the parade routes and paying for prime viewing in judging areas. Sponsors make themselves very visible by distributing products and souvenirs along the parade routes. This indelible sponsorship signage is eagerly encouraged by the organizers as well as extensive live coverage by media houses, who do a superb presentation in respect of radio, press and television with their creative costumed presenters.

The pre Lenten Carnivals of the French West Indian islands of Martinique, Cayenne and Guadeloupe, are folk Carnivals steeped in traditional masquerade, functional floats, acoustic African drumming, brass sections, percussive steelband, chanting and choreographed dancing. There are increasing indications that the pretty mas influence of feather, bikinis and bras has found its way into the scintillating spectacle of energy and the creative. The municipalities which host events in their communities give whole hearted support in respect of infrastructural and financial support for Carnival.

Every band participating in the Carnival receives a subvention to house Mas Camps, source green material, build functional floats including electrical installation to highlight the main source of economic communal activity within the environ. In effect after participating in the Community Carnival, most likely the Band would perform during the major municipality event. In the case of Guadeloupe where I recently was a spectator at this year’s celebration Pointe a Pitre had about 90 bands from the island wide community competing for the top prize, a spectacle which lasts from noon to 10.30 p.m. In the case of Francois and Basse Terre, whose events are of shorter duration, they manage about 50 to 60 bands running from 1:00 p.m. top 9.30 p.m. The Carnival costumes therefore have to generate luminosity.

The categories of competition are Ti mas, Gros Mas and drumming bands. Judging areas are design and colour, movement, music with the singular and combined form that evolves the winner of each category. While the Ti Mas and GrosMas normally number between one to two hundred, the (dwapo) bands or drumming bands number in the upper hundreds and thousands as in the case on Akiyo, Mas KaKle, NasyonNegMaron with the accompanying chanting, incense, mud, molasses, body paint, local green material, African fabric, beads, arm bands, necklaces, coconut and banana leaves, flora and fauna.

The top prize offered by the organizers, Groupement pour la Culture et le Carnaval Region Pointoise, to this year’s winning Band Guimbo All Stars, is a tour to St. Lucia to participate in St. Lucia Carnival on July 17 and 18. Vive la Vaval!