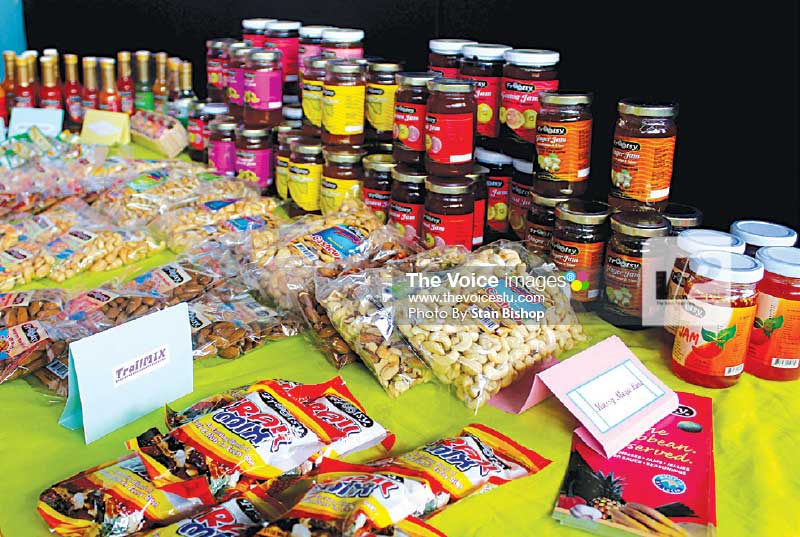 SCORES of businesses from the Organization of Eastern Caribbean States (OECS) and Martinique showcased their goods and services at the three-day business exposition, “Specialty Caribbean Expo 2017”, held at Daren Sammy Cricket Ground over the weekend.

Organized by the Saint Lucia Trade Export Promotion Agency (TEPA) in association with the OECS Secretariat, the event – themed “A Unique Buying Experience” – aimed at increasing exports in priority sectors and markets within the region.

The one-of-a-kind event also gave OECS and Martiniquan businesses the opportunity to interact with stakeholders, policymakers, competitors, customers and buyers in a personal way. Many businesses told The VOICE that the event gave them the platform to network in a meaningful way and that interest in their businesses had already begun paying dividends.

“Anytime there’s an expo or something similar, we’d want to take part because the more people know about our business is always better for us,” said Seema Khatoo of LightSparc Training, a Saint Lucian company which offers globally-recognized courses in education. “Also, when you think about the cost of taking part in an event like this, it’s relatively cheap compared to advertising in other forms.”

Aside from networking with the patrons, Khatoo said it was also an opportunity to speak directly to other small business owners and get to know how they were promoting their businesses. Getting the word out about the business, she said, was also a priceless spinoff.

“Once I get one new customer, it’s worth the investment. It’s also important that people see who you are and hear from you personally because that helps in developing brand recognition,” Khatoo said.

Past President of the St. Lucia Manufacturers Association (SMA), Ronald Ramjattan, said he was pleased that TEPA had taken the decision to invite businesses from the OECS islands to Saint Lucia for the event. By bringing them in and attracting buyers, businesses got to network with their counterparts and the buyers got to see the competitive spirit that exists within the OECS, he said.

“Within the OECS, it’s difficult to mould and bring together the various manufacturers,” the Managing Director of Baron Foods Limited said. “It’s an effort by itself and we are so proud that fellow manufacturers are under the SMA pavilion.”

On Baron Foods Limited’s participation, Ramjattan said: “It’s the best way we have found over the years to sell our products. The people are here, so why keep the flavours away from them? (So we) expose the flavours, expose the meals and teach them how to use the products.”

Another SMA Past President, Caribbean Awnings Production’s Managing Director, Paula Calderon, said any endeavour that serves to highlight the quality products and services offered in the region was a plus for the business community.

A wide range of good and services were on display in booths under the stands at the cricket ground with hundreds of patrons, including schoolchildren, getting an up close encounter and some free samples.

The SMA, however, caught many people’s attention as members were concentrated in a small block to offer potential buyers their wide range of goods and services. Calderon said the decision to do so was strategic.

“For the St. Lucia Manufacturers Association, this year’s exhibition was to uplift the products and show them in their reality – how they would look like when you have them in your homes or offices,” she told The VOICE.

Calderon said SMA members hoped to donate some of the items that were on display at the exhibition to people who were in need.