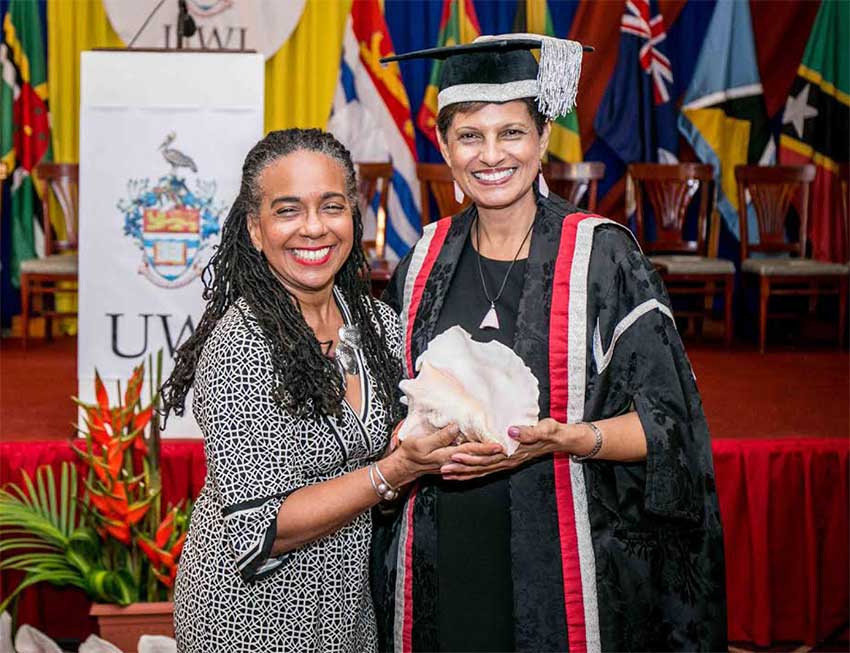 ON Thursday, March 16, 2017, Dr. Luz Longsworth was inducted as the third Pro Vice-Chancellor and Principal of The University of the West Indies (The UWI) Open Campus. The induction ceremony took place in Belize, where Dr.Longsworth is a naturalised citizen, having served in the country through various capacities in academia and business. It was witnessed by over 150 guests including the Governor General of Belize, Sir Colville Young; the Lord Mayor of Belize, Darrell Bradley; government ministers and UWI officials and academics from across the Caribbean.

In addition to being the third Pro Vice-Chancellor and Principal of the Open Campus, Dr.Longsworth is also the Campus’ third female leader. Commenting on this occurrence she said, “While we often celebrate the first woman who achieves a breakthrough, it really is only when we have evidence of the continuity of that breakthrough that we can claim true gender progress. I therefore celebrate being the third female principal of the Open Campus and salute my predecessors; our first female principal Professor Hazel Simmons-McDonald and our second principal, Professor EudineBarriteau, as well as former Deputy Principal Professor, Vivienne Roberts and current Deputy Principal Professor Julie Meeks for their roles in ensuring that we are making our firsts in the Open Campus last for a long time!”

Vice-Chancellor of The UWI, Professor Sir Hilary Beckles then presented Dr.Longsworth to Chancellor, Sir George Alleyne with the ceremonial robing for the induction. In his remarks, Sir George declared, “You now have the opportunity to lead the newest of the institution’s major centres of learning and research. You will also have the opportunity to put into practice what you have often declared as almost a holy grail: improving the lot of Caribbean people through education. No other responsibility is greater than this: that of helping to shape and guide the minds and thinking of the young people of our region and I have absolute confidence in your capacity to discharge that responsibility.”

Dr.Longswoth’s induction speech centred on advice she received prior to the ceremony which she summarised in three ‘C’ principles: Community, Commitment and Conchs. She acknowledged the community of family and friends that contributed to her foundation, values and core principles and The UWI community for her academic, intellectual and activist formation. Explaining the second ‘C’, she alluded, “…the commitment of my colleagues to our mandate of expanding access and leading innovation (of The UWI Open Campus) has been unwavering.” Lastly, her final ‘C’ represented the Queen Conch shell. She said, “This symbol of the conch shell—a symbol that is recognised throughout our region from Belize to Barbados from Trinidad and Tobago to Turks and Caicos. This is a symbol of resilience, it is a symbol of struggle, it is a symbol of community, it is a symbol of a call to action that our ancestors in each one of these Caribbean lands used to bring our communities to action.”

The ceremony ended with traditional Belizean performances by Garifuna drummers & dancers, followed by the departure of the academic procession and a cocktail reception sponsored by the Belize Ministry of Education, Youth, Sports and Culture.