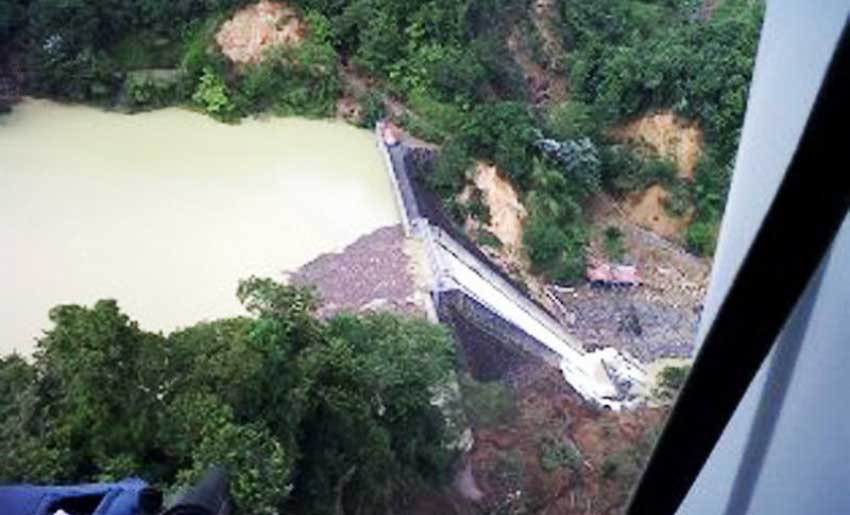 THE Green Party is urging the government to swiftly address the issue of water storage on the island in the context of climate change and its effects.

The party noted in a statement that it was now almost seven years since the passage of Hurricane Tomas, yet not one bucket of silt had been removed from the John Compton Dam. It said most of the planet was well aware of the reality of climate change and its effect on weather patterns and we here in Saint Lucia were starting to experience the worrying trend of extended periods of dryness during our traditional dry season and less rainfall during our wet season, although the last wet season started late but really delivered from September to December.

As a result, the amount of water that is traditionally stored during the wet season on the island is getting less. Apart from this fact is the occurrence of extreme weather events such as isolated incidents of torrential rainfall that would cause even more siltation to the dam during the coming wet season, which makes the situation even worse.

The combination of all these factors puts extreme stress on our limited water resources, the Green Party said. Reality is that there cannot be any development in any sector, whether in tourism, agriculture or manufacturing, without the ready availability of water. Also, water is the most basic element for life to thrive and ready access to water for every Saint Lucian is paramount. The addition of three new hotels north of Rodney Bay also puts stress on the already bad water supply situation.

Almost 60 percent of the population resides north of Castries and their water supply is dependent on the water in the dam. So the fact that there is approximately 1.5 million cubic yards of silt in the dam reducing its water holding capacity to one-third is very critical. Apparently, there is talk of desilting again and, as a result, we would like to put some figures and calculations into perspective.

Let us do some calculations: There IS approximately 1,500,000 cu\m of silt presently in the dam. If we divide this number by 20 (one 20 cu\m truck), this amounts to 75,000 truckloads. Let us assume that the silt will be transported and deposited in the Cul de Sac Valley below Ciceron and Goodlands in that low- lying area adjacent to the Millennium Highway, which at present is a no-development zone because of its susceptibility to flooding, but has the potential to be used as some industrial site or even for housing if it were backfilled.

Some facts to consider:
An upgraded road system would be necessary to accommodate the use of the road by these heavy trucks, which is a major cost. The roads would need to be upgraded, anyway, to accommodate the transportation of the dredger.

Noise and dust pollution in the communities through which the trucks would be driving would be a major concern.

No dredger will become necessary to be purchased or rented.

The job can be done in the dry season without interfering with the water supply.

Breakdowns and bad weather would make the job take longer.

So silt removal alone would cost approximately EC$80,000,000. Road improvement would cost at least EC$20,000,000. So with cost overruns, breakdowns and bad weather to consider, let us say that this project would cost about EC$120,000,000 and take two years to complete.

Apparently, one of the original proposed costs of desilting the dam using a dredger was being quoted at EC$65,000,000.

Some questions: Does this include the road improvement that is necessary to accommodate the transportation of the dredger to the dam? Where will the silt be deposited? Should the dredger remain at the dam for continuous maintenance knowing that extreme weather events are happening more frequently and that re silting can happen at any time in the future? Is the final cost going to really be EC$65,000,000 knowingthat cost overruns are a part of life here? Should we be looking to other areas on the island to construct other dams? Should it be legislated that all hotels with beachfront access be required to have desalination plants for their operation?

What we do know is that climate change is real and we must prepare for extreme events. We are so happy for the rain, but how much of this water is being stored for the future? We must increase our water storage capacity on the island. What is of great concern is that successive administrations are completely ignoring the importance of an affordable water supply of high quality and dependability for all of its citizens.

The Green Party said it was “strongly” encouraging the government to attend to this important issue as soon as possible.