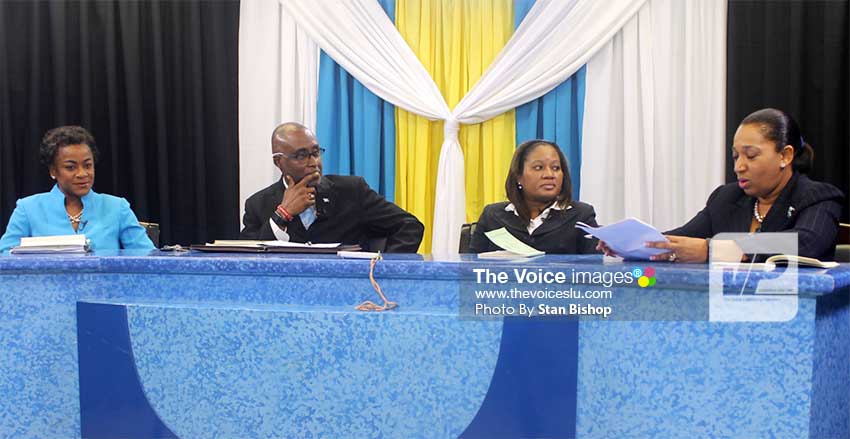 FOR much of the past eight months, the House of Assembly has been conducting its business without a Deputy Speaker following the vacating of the post by Castries Central MP, Sarah Flood-Beaubrun.

Flood-Beaubrun, who was originally the only government MP who did not receive a ministerial portfolio, following the June 2016 general election, was subsequently appointed Minister with responsibility for External Affairs in July, sparking a long-running debate as to whom should fill the vacant post.

Since then, the matter has been a recurring contentious issue in the House, with Speaker of the House, Leonne Theodore-John, beginning the proceedings by asking that a Deputy Speaker be nominated. That request is often met with deafening silence and the proceedings continue.

The matter came up on Monday evening during a panel discussion moderated by former Attorney General, Kim St. Rose, and held at GIS Studios.

When asked by St. Rose whether a Deputy Speaker was essential, Theodore-John was an emphatic “most certainly”, citing Section 36 of the Saint Lucia Constitution and Number 3 of the Standing Orders.

The government’s argument has been that the “as soon as convenient” phrase means that whenever it deems it necessary, or convenient, to appoint a Deputy Speaker. Further, it posits that the Opposition can also field a candidate from among its six MPs to fill the post. The Opposition has since declined and plans to take the matter to court.

“It’s not for me to decide,” Theodore-John said on Monday. “Remember, I am the Speaker and I sit and I take my position. One of the things that are on the Order Paper since there’s been no deputy is that always as soon after prayers have been said, I proceed to asking the House – the composition of the entire House – to elect a Deputy Speaker… I can only ask the House to elect a Deputy Speaker in accordance with the Constitution – and not just the Constitution (but) the Standing Orders of the House.”

However, Former President of the Senate, Claudius Francis, disagreed with Theodore-John, saying that “the spirit and intent of the Constitution are as important as are the words written.” The House, he said, is not properly constituted.

“I’m not a lawyer (but) Madame Speaker is. It could not be that the Constitution and the Standing Orders would place such an important factor on the election of a Deputy (Speaker) at the first sitting of Parliament to actually explicitly say in the Constitution that no other business can take place unless a Deputy is elected,” Francis said.

He added: “That is like having a cricket match where there are two umpires and you’re saying it’s okay to start the match with two umpires but one can walk out in the middle of the match and it can continue. You can’t.”

Francis said the Section 36 (10) of the Interpretation Act states that where a time limit or time frame was not given in a statute, it should mean ‘immediately’ and ‘as soon as possible’. He cited a South African case in which ‘as soon as possible’ was determined to be 14 days and Privy Council cases that determined it to be 21 days.

“The Speaker is the ultimate authority in the House (and) must go beyond asking members to elect a deputy. The Speaker should adjourn the House and no further business (done) if a deputy is not elected.”

Francis said the reverse situation occurred in 2006 when Prime Minister, Sir John Compton, appointed every Government MP as Cabinet Minister or Parliamentary Secretary. He said that after bringing that matter to Sir John’s attention, a Parliamentary Secretary was asked to step down to fill the post of Deputy Speaker.

In rebuttal, Theodore-John cited Section 35 (3) of the Constitution which states that “no business shall be transacted in the House (other than the election of a Speaker) at any time when the office of Speaker is vacant.”

“What does that speak to? That the business of the House – once there is a Speaker – can be conducted. So while I would be the first to say the Constitution provides for a Deputy Speaker – and also the Standing Orders – I wish to make it abundantly clear that the same Constitution under Section (3) specifically states that no business of the House shall be conducted when the office of Speaker is vacant other than the actual election of the Speaker,” Theodore-John said.

With the Deputy Speaker vacancy continuing to be a contentious one, it seems only a matter of time that the authorities realize just how much an inconvenience the delay in appointing one can become. Even Theodore-John has a few concerns.

“I am human. I am a wife (and) I am a mother. God forbid that there is an emergency or I’ve taken ill and the House Sitting has been set for a particular day. Does that mean that the business will have to be postponed at my convenience? Well that is what is happening right now. I mean, we’ve been blessed. The situation is such that we’ve been blessed,” she explained.