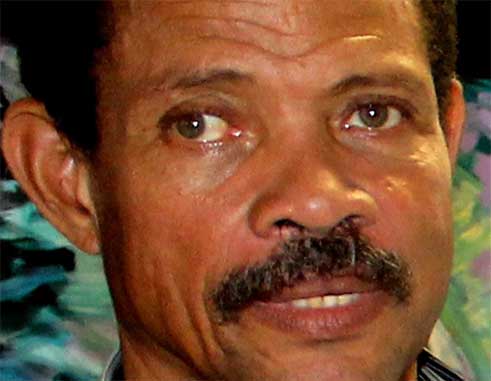 FOR the past three decades, artist Alwyn St. Omer has been hoping that one of his best pieces of work becomes reality. However, the monumental task in having that dream come true seems to rest squarely on money and political will.

After Saint Lucia gained Independence from Britain in 1979, there was a fervent push by local authorities to create a definitive symbol to assert the pride that came with that historic moment. A competition was held to come up with a design for the proposed National Monument and St. Omer’s entry won.

At the time, the hope was that the design would become a reality in time for the island’s 10th anniversary of Independence in February, 1989. At the time, St. Omer was in his twenties and studying art at the Jamaica School of Art and returned home on his holiday break just so he could work on the design and submit it.

St. Omer’s vision for the National Monument was of the Amazona Versicolor – the national bird – in abstract rising in flight. The design seemed appropriate at the time, considering that the bird was deemed an endangered species – numbering around 300 – and a massive promotional effort undertaken to save its population.

“I thought the monument would be a wonderful symbol of the spirit of survival,” St. Omer, son of famous painter and designer of Saint Lucia’s flag, Sir Dunstan St. Omer, told The VOICE. “So I saw it fitting to produce a monument that would depict the survival of the parrot and the people’s aspirations rising in flight. That was my dream at the time.”

St. Omer said former Prime Minister Sir John Compton and government minister Romanus Lansiquot were the lead campaigners at the time to have the monument serve “as a symbol to express our nationalism”.

After preparing a three-dimensional model of the proposed monument in steel and concrete, under the guidance of one of Jamaica’s leading sculptors, he developed a full-scale model which was launched for the island’s 10th anniversary of Independence.

A feasibility study for the monument was to be undertaken by Kier International. However, since the island lies within the hurricane zone, there were fears that the monument would be damaged by strong winds.

After testing the model in a wind tunnel in England and realizing that they model did take flight under windy conditions, it was suggested that the model be modified, including increasing its size and using modern metals instead of concrete and steel so as to allow for the monument having retractable wings. According to St. Omer, those suggestions were never followed through.

In the 1990s, it was estimated that the monument would cost nearly $3 million and would be erected near the Castries Waterfront (the park adjacent to the NIC building). However, with the advent of technology, St. Omer posited that the cost would be significantly less today. But the political will, he said, seems lacking as successive administrations have virtually abandoned those plans, citing lack of finances.

While he admitted to getting some promising feedback from former Prime Minister, Dr. Kenny Anthony, during the last administration – that government might be able to source the relevant funding for the monument – he was told to have an estimate done for the project first. However, St. Omer said even getting that estimate has its challenges.

“Just getting that estimate done costs a lot of money because you have to use the expertise of various experts who have to investigate the site and do technical drawings and stuff like that,” St. Omer explained. “So it might take about a year of planning and using the relevant architects and designers.”

Without the estimated $1 million grant funding to undertake the costing and create a working design from his three-dimensional model of the proposed National Monument, St. Omer said his dream continues to be a nightmare. As such, he said any assistance towards making the monument as reality was welcome.

St. Omer said he has already brought the matter to the attention of Prime Minister Allen Chastanet and Minister for Culture and Local Government, Fortuna Belrose, and is awaiting an official response. He also plans to meet with Castries Mayor, Peterson Francis, who has repeatedly stated that Castries needs to undergo a massive transformation.

“There is a lot of talk (about) the creative industries but very little passion is involved and nothing has actually been done by successive governments to honestly stimulate the dramatic changes required to inject new life and hope for the development of a thriving arts industry and, by extension, the economy of our country,” St. Omer said.

He added: “It’s an irony, as I firmly believe that with all our social ills, we are unable to focus on the very actions that may help provide a cure. We remain unable to visualize the huge international impact this structure would have towards the revitalization of Castries and the waterfront. It would become an instant tourist attraction with its own park and vendors’ arcade, welcoming visitors into the city and thus creating employment.”

For more details on how you can assist in making the National Monument a reality, contact St. Omer at 484–4363 or stomer.alwyn@gmail.com.