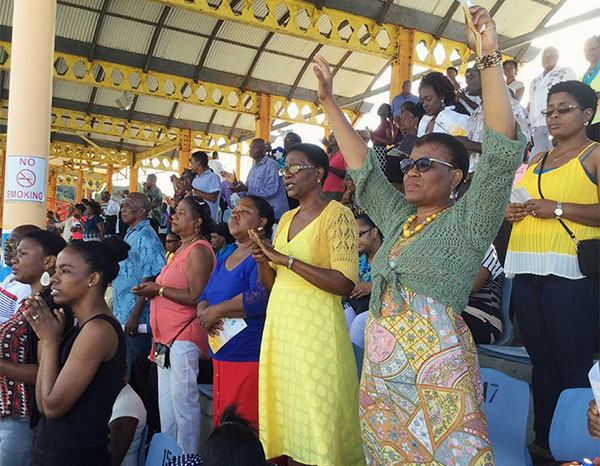 LOOK out for the national colours of Yellow, Blue, Black and White throughout St Lucia today our Independence anniversary eve.

It’s National Colours Day, a day when St Lucians are urged to wear their colours to school, work, or just about any engagement.

There are four other big events on the day’s calendar as well. There’s an Independence Youth Expose in the city centre this afternoon and a Miss Independence Pageant at the National Cultural Centre and Prime Minister’s Ball at the Sandals Grande tonight which is in aid of the Upton Girls Centre.

The Independence Walk a Thon gets underway at 4 p.m., from the Massy Store in Cul de Sac.

Tomorrow, Independence Day, a public holiday, the major activity is the Best of St Lucia event at the Daren Sammy Cricket Ground, a round the island Ride and Drive that will end at Beausejour, Gros Islet and a Cassava Festival in Vieux Fort.

Minister with responsibility for Culture and Local Government Senator Fortuna Belrose has called on all Saint Lucians to continue to embrace activities for the Independence anniversary.

On Sunday, the government hosted a successful “Prayer, Praise and Worship” session at the Daren Sammy Cricket Ground with persons from several different religious denominations in attendance.

“We had a programme which was designed to uplift us as citizens of this country,” noted Minister Belrose. “The response from the religious community and the leaders and ministers was phenomenal. Just the opportunity for us to see each other pray and hear each other pray and to listen to the different faiths and how we all have this one belief in love and God our Creator, was significant. I just hope that Saint Lucians will stay in that mode of continuously asking for God’s intervention and guidance as we all hope to ensure that we contribute to the development of our country.”

Talking about the various activities planned for the anniversary, Belrose said: “It is about making that commitment to changing the way things are in our society. Saint Lucia belongs to all of us and this is our time to show that we are patriotic Saint Lucians and we are part of the celebrations that are going on.”