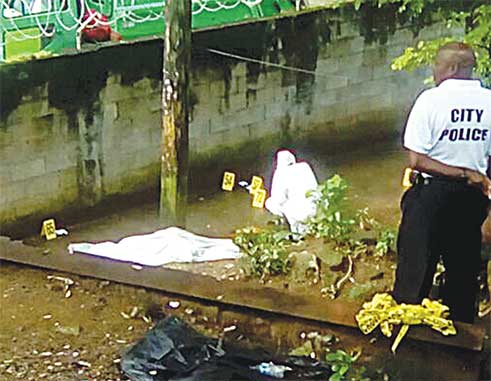 A 23 year old man was gunned down in a hail of bullets in Castries Thursday morning to become the 30th. homicide of the year.

The life of Junior Scotland was snuffed out around 7:30 a.m. along the narrow track which leads from Jn. Baptiste Street into the shanty area sandwiched between the CDC buildings and the National Workers Union Car Park.

Scotland was a father of two and the only child of his mother, who was too emotional to speak to the media. But she said no words or explanation would bring her only child back to life.

On the other hand, she said she was comforted by the fact that she was blessed with two grandchildren who will serve as memories of her fallen son.

One member of the community who opted to remain anonymous told The VOICE that Scotland’s death was a sad reminder of the reality the “ghetto people” face daily.

He said: “He raised rough in the ghetto. He ended up in jail early and he could be troublesome because you know already…how children behave when they’re raised in the ghetto.”

Although no details have been released in relation to the shooter/shooters, family and friends claim to have an idea as to who committed the crime.

Police were heavily present at the scene and are currently investigating the matter.