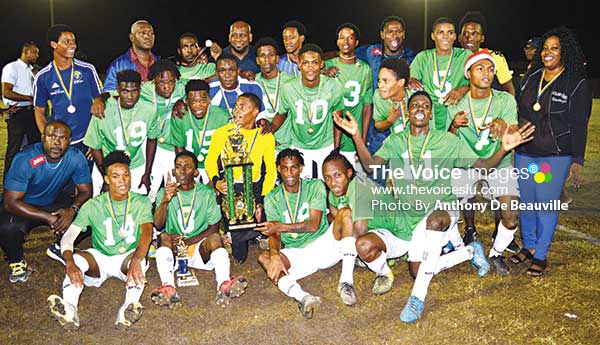 Soufriere Downed 4-3 In Penalty Shoot out.

Playing before a crowd estimated at 1,300 fans, VFS squandered four scoring opportunities in front of goal in the first seven minutes of the encounter. Despite the misses, however, they were able to settle down somewhat as Jervic Mc. Farlane opened the scoring after their fifth try at goal in the 12th minute to put the team ahead.

The tightly-contested encounter between the evenly-matched teams produced quite a few precious scoring chances thereafter before Vieux Fort South’s Gregson President was shown a red card by Referee Vivian Robinson , after two bookable offences in the 36th and 40th minutes respectively.

Playing with a one man advantage, Soufriere switched into high gear by applying relentless pressure on the VFS defense that eventually paid off in the 44th minute when Dimitri Modeste shot home a loose ball past VFS goalkeeper Leon Alexander for the much-deserved equalizer to signal the end of the first half of play.

On the resumption, both teams looked set for battle, but the goal scoring opportunities a begging. Vieux Fort South’s Antonius Myers had the best of all in the 61st minute with a one-on-one opportunity, only to hit way over the cross bar. Captain SarnSavery, the standout defender in the tournament, missed the right post by the slightest of margins after swooping in to follow-up with a header on an effort by Myers off a free kick.

Vieux Fort South forward Antonio Joseph, who scored four goals against Vieux Fort North in the semifinals, at times looked frustrated on the square for not making better contact on an 81st minute header that went over the cross bar.

Soufriere, too, found a new gear as Neil James and Kevin Lucien came up big in the defense as they played with maturity and a never-say-die attitude. Jordan Henry’s two efforts, one a low drive from 15 yards out, skipped just beyond the right post and another had VFS goalkeeper making a big save when it really mattered.

In the dying stages of the encounter, Vieux Fort South’s Noah Nicholas (substitute in the 78th minute) cranked an attempt in the 89th minute, but didn’t realize he had more time to shoot and hurriedly fired across goal from just outside the box; however, there were none of his teammates to shoot home what would have been the winning goal.

Vieux Fort South’s Head Coach, Emmanuel Bellas, said, “I knew we would have won the championship, but it is a situation where you never want the game to go into penalty kicks. With Gregson President getting the red card, that would have slightly put us on the back foot, but I believe there was enough substance there for us to take the game to Soufriere. It’s just unfortunate we did not capitalize on the many opportunities we got. It’s a game we should have won by about three clear goals.”

Jeremiah St. Jean, Head Coach for the Soufriere team, said:“Vieux Fort South is a very tough team to defeat, especially playing at home. We knew it wouldn’t be easy with a one-man advantage. I told the players not to get too complacent and just keep their heads up in the game even with ten men because VFS still had the armoury to defeat us. We tried to stay calm and composed as we could to pull it out, but on the night the better team won.”

He continued, “To lose in a penalty shootout to a team that gave all the other teams four and five goals before playing us in the finals, I am proud. I am still very proud of my players for their performance despite the many scoring opportunities. It’s a game of two halves. VFS, too, squandered numerous scoring opportunities.”