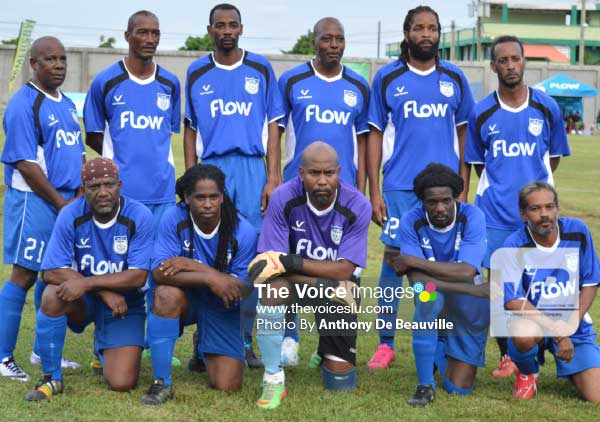 EIGHT teams have qualified for the quarterfinal stage of the main draw of the Veterans Football Tournament when the showpiece resumes in January 2017.

Under clear skies at the Sab Sporting Facility last Sunday, there were wins for Gros Islet, Anse La Raye, Prophets and Kings and VSADC.

In the first encounter, Gros Islet, needing four clear goals to secure a quarterfinal berth, fell short of their target despite defeating Dennery All Blacks 3-1, with goals from Mike Phillip in the 11th minute, Kevin Motley in the 37th minute and Keith St. Claire in the 86th minute. Dennery All Blacks’ lone goal came from Claudius Mc Nenville in the 13th minute.

In the second encounter, Anse la Raye, too, needed a victory against Group D leaders Caricom Masters. The boys from the west coast came out firing and in the process halted Caricom Masters’ goal-scoring spree when they defeated them 1-0 despite playing one man short after Daniel Wiggins was shown a red card in the 36th minute by Referee Nigel Mathurin for dissent. The first half ended nil all.

On the resumption, both teams created a number of scoring opportunities, but it would be Anse la Raye that would nose ahead in the 70th minute when Mervin St. Croix eluded Caricom Masters and former national goalkeeper Abraham Mentor to his right.

But the entertainment on the square was far from over as Anse la Raye kept their fingers crossed, hoping the encounter between Prophets and Kings against first-timers Mon Repos Sharks would end up in a draw or at least a surprise win for Mon Repos. That was not to be as the Sharks held on well up until the 40th minute before conceding a goal. Desmond Francis opened the scoring for Prophets and Kings as he shot home a loose ball in the six-yard box in the 40th minute past the Mon Repos goalkeeper Raymond Robinson to seize the halftime advantage.

On the resumption, PAK immediately went into high gear when Ricardo Cosnie made it 2-0, Francis scoring his second goal in the 67th minute. At that point, it was over and done for Mon Repos Sharks as their weary legs could not keep up with the pace of PAK.

Roland Dolor added insult to injury when he made it 4-0 to secure his team’s quarterfinal spot. The win did not only dispose of Mon Repos, but Anse la Raye as well from the main championship.

In the final game, VSADC showed their class as they looked like a team that meant business. The city boys took on last year’s finalists, Congorians, in a must-win affair for the latter. VSADC opened the scoring through Dean Jean in the 23rd minute to leave the score line 1-0 at the half.

On the resumption, both teams upped the tempo but it would be VSADC’s Davidson Belizaire’s left foot shot across goal aided by some light wind that eluded the Congorian goalkeeper in the far left hand corner of the goal to make it 2-0 in the 59th minute.

Striker Barnett Bledman soon made it 3-0 in the 69th minute, but the excitement and drama did not end there as Congorians’ Garvey Vitalis’ double strikes gave his team a glimpse of hope with goals in the 77th and 87th minute that eluded VSADC goalkeeper Stanley Lesporis.

The quarterfinals for the main championships are as follows: Soufriere versus FLOW Lancers FC, VSADC against Valley Legends, Central Vieux Fort versus Prophets and Kings and Micoud against Caricom Masters.