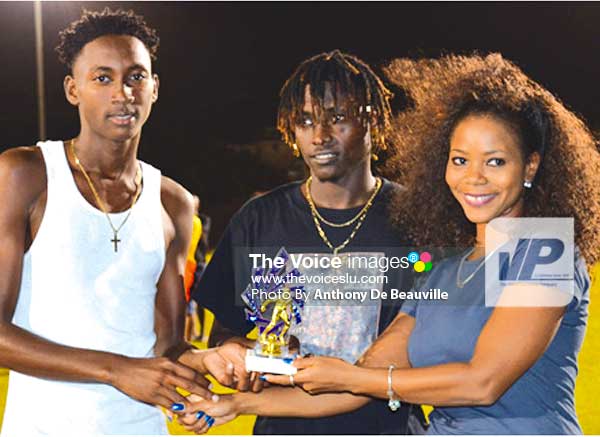 In front of an appreciative crowd of football supporters Massy Northern United continued their good run as they trounced Sandals 7 – 0 and emerge champions. At the half time whistle of Referee John Eugene, the score was 3 – 0 in favour of MNU with goals from Aramis Gilbert in the 3rd minute, Troy Greenidge in the 19th minute and Daniel Denis in the 22nd minute.

By then the writing was on the cards as Sandals had no answer to the fast pace game of Northern United that bosted a number of senior players currently representing the Gros Islet football team in national competition.

On the resumption, it was a one way street as Northern United continued their goal feast. Elijah Louis made it 4 – 0 in the 48th minute, two quick strikes from Nicholas Lawrence in the 52nd and 54th minutes made it 6 – 0 and Greenidge claimed his second on the night in the 56th minute.

In the third place playoff between Dominators Youth and GMC United the game was reduced to 35 minutes per half because of a late start. It was all GMC United as they went on to defeat Dominators 8 – 0 with goals from Tev Lawrence in the 19th and 22nd minutes, Liam Ernest in the 24th minute and Selwyn Boyce in the 30th minute to make it 4 – 0 at the half time whistle.

On the resumption, GMC United continued where they left off before the break to score four more goals from the boots of Sebastien Ribot in the 45th and 63rd minutes and Tev Lawrence in the 53rd and 58th minutes giving him a hat – trick.

Immediately after the finals, the following awards were presented – MVF of the Finals – Nicholas Lawrence; MVP of the Tournament – Sian Andrew; Best Defender – Sebastian Ribot and Most Goals in the Tournament — Greenidge and Tev Lawrence.