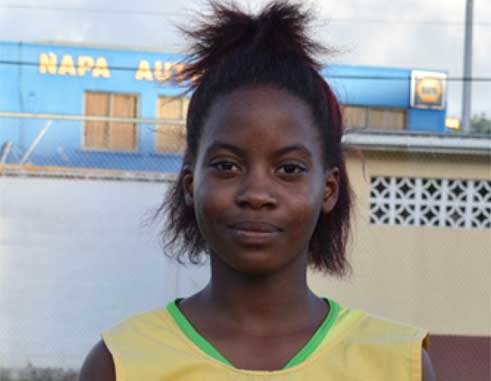 WITH Saint Lucia scheduled to host the Caribbean Netball Championship in mid-2017, one teenager has her eyes set on representing the country at that level.

Alfred started playing netball at age 9 with the Kidz Net Camp headed by Coach Alice Lynch and was encouraged to continue playing the sport by Coach Donnalyn Joseph and Mary Ann Martial-Montoute, both from Shamrock Sports Club.

Since then, she has taken an interest for viewing and playing the sport; she also took it up a few notches at St. Joseph’s Convent after leaving Carmen Rene Memorial School. Alfred played for the school’s team throughout her five years as centre and wing attack.

In 2015, she became a member of the Shamrock Sports Club where she continues to represent the club as its centre player. She also represented SALCC as centre, wing attack and defence player in this year’s Secondary Schools Under-19 Netball Tournament.

In an interview, she told The VOICE, Alfred confided that her favourite subjects are Biology and Geography, because she finds it fascinating how the human body and the ecosystem are and how they relate symbiotically.

The VOICE: Do your parents encourage and support you at the various matches and tournaments?

Alfred: Yes, my parents and my younger sister support me at all matches. Interestingly, however, no one in my family played the game before.

The VOICE: Who’s your favourite local netball player, and why?

Alfred: My favourite player is Vionce Weeks. She possesses many leadership skills and captains both her school team and Shamrock Club team. She motivates her teammates and controls the game when playing. She is a national Under-16 player and also plays football at the national level. It amazes me how she can cope with all of these responsibilities at such a tender age.

The VOICE: With your hectic schedule at school, how do you prepare for a netball tournament?

Alfred: I balance my school work and sports so I am able to train on a daily basis. As a team, we have one-on-one time, discussing we failed to do in our last game and plan what we intend to play at a higher level.

The VOICE: How many times have you represented the Shamrock Sports Club?

Alfred: To date, seven times at local tournaments (Shamfest, Independence Classic and Community Ramas). As a club, we have won five of the seven tournaments I have participated in. I have never worn the national colours, but I am working towards that goal.

The VOICE: How far would you like to go in the sport?

Alfred: After I leave school, I plan to train and teach primary school children to play the game and hopefully start a recruitment drive for a tournament to be held specifically for junior players to aid in the quality of netball at the primary and first-form levels.

The VOICE: Have you ever represented Saint Lucia at any level and in which sport?

The VOICE: You have never represented Saint Lucia before in your favourite sport, netball. Would you like to in 2017 and what can one expect from you?

Alfred: Yes, I would like to represent Saint Lucia at the many tournaments scheduled for 2017, such as the OECS Under-23, Windward Islands Schools Tournament and the Caribbean Netball Championships. I also plan to remain focused and work a lot harder at my game and level of concentration, especially when under pressure.

Alfred: I go out with friends. I love to dance and I love music. Sometimes I go to weekend camps held by the Saint Lucia Cadet Corps or events organized by Dukers.

The VOICE: What advice do you have for young aspiring netballers?

Alfred: Keep playing the sport and no matter what, never give in despite what anybody says. It doesn’t matter how tall or short you are or how big you are, never let the negative words of others stop you from playing the game at your best. Always be fair and have good sportsmanship because positivity and discipline are the ways to success.