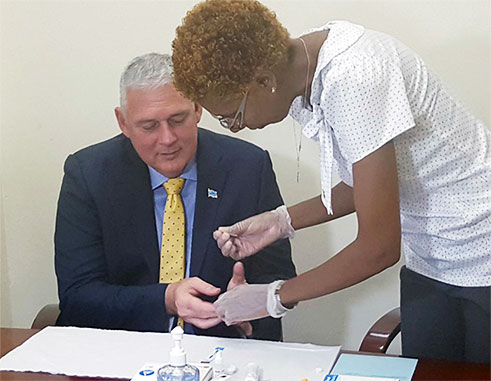 THE Director General of the St. Lucia Red Cross Terrencia Gaillard has expressed concern about the serious lack of education and awareness of the HIV/AIDS that continues to claim thousands of lives across the globe.

Gaillard spoke exclusively to The VOICE, expressing her dismay and frustration over the glaring fact that the topic of HIV/AIDS has seemingly become a dormant issue to the respective bodies and institutions charged with disseminating information and educating the masses about it..

The topic, she said, has been pushed aside whilst issues like vector borne illnesses and non communicable diseases had taken precedence.

“I’m a bit concerned that we’ve heard that there are no monies available for HIV/AIDS and a lot of the messages we used to see on our televisions and around the place are no longer available. I’m wondering what’s happening, because we know that we have people that are HIV positive in St. Lucia, are they taking the necessary precautions?”

She continued: “There is the alliance that used to do a lot of condom distribution but they are no longer available because of the lack of funds. Even the Red Cross does not have funds dedicated to HIV/AIDS education but in our own way, we spread the word when we can, how we can.”

Gaillard said the fact that the actual number of cases is unknown is extremely problematic. This, she said, was especially crucial since the advancement in medical technologies and treatments regarding the virus and syndrome had seen the life expectancy and lifestyles of those infected, improve exponentially.

On the other hand, she said, those advancements may as well be null and void as the word is not being spread efficiently to allow those infected to want to come forward for treatment or for people to take the necessary steps of precaution.

Gaillard said: “There are still people out there who are ignorant about the ways the virus can be transmitted. There is a need to continue the education. There is a need to be educating people all the time, not only when it’s World AIDS Day or when the Ministry of health puts out the figures, but there’s a need for continuous HIV/AIDS education, be it in the workplace or on the streets. People are having sex everyday all over the place. We have young people who consume lots of alcohol, and when they are high on alcohol, what do they do? Are they aware that they can expose themselves and their partners to the virus? We don’t know, so we need to be continuously at our young people…at everybody.”

With Thursday being recognised as World Aids Day, The VOICE attended an awareness and education exhibition outside the Ministry of Health.

At said exhibition, we spoke to Bureau of Health Educator with the Ministry of Health, Vonette Victor.

Aked about the Ministry’s stance regarding Gaillard’s concerns, Victor agreed that education and awareness on vector borne diseases and non-communicable diseases have become priority, as well as the fact that more can be done to promote awareness, education and preventative information on HIV/AIDS; however, she said that the Bureau is in fact working arduously to shed light on the matter.

Victor said: “We are targeting the schools, speaking about sexual health and focusing on STIs. I came from an STI clinic and we know that anyone who comes to the clinic is educated. Also at the Bureau of Health, we use today as a forum to educate persons. So we are targeting the schools and the members of the public at STI clinics throughout St. Lucia. We are also targeting them using the media and through our online page, where every time a condition arises; we educate and inform the public about it. So there are areas where people can get the education that they need…we are doing all that we can.”

Following a startling news report from the UN claiming that St. Lucia has the second highest number of people living with HIV/AIDS in the Eastern Caribbean Victor said St. Lucians should look at the bigger picture before rushing into panic mode.

She said it is important that people pay attention to the numbers and the fact that report spoke about islands of the Eastern Caribbean and not the other islands in the region that are considerably bigger than we are, as well as the fact that the report was not referring to numbers per capita.