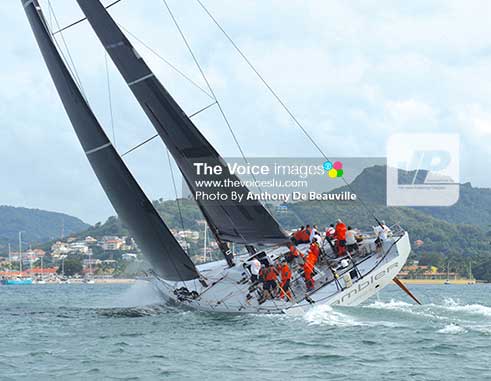 RAMBLER 88 has broken the Atlantic Rally for Cruisers (ARC) course record with a time of 8 days, 6 hours, 29 minutes and 15 seconds.

This is the fourth consecutive year the record has been broken; with Caro (2013), Leopard (2014) and Brunel (2015) being the previous record-breakers.

The 31st edition of the ARC left Las Palmas de Gran Canaria last Sunday and Rambler 88 was among the other 220 boats in this year’s rally, racing 2,700 nautical miles in what is described as a “Super Maxi On the High Seas”.

The 27-metre long vessel is owned by Mike Harvey and captained by George David. Carrying the USA flag, the 18-member crew made up of nationals from the USA, Australia and New Zealand crossed the finishing line in Rodney Bay at 3:14 p.m. on Monday under overcast skies.

The new time beats the previous ARC record by a whopping 1 hour, 10 minutes and 15 seconds set by Brunel last year.

Tourism Minister Dominic Fedee, who missed the official arrival due to a Cabinet meeting, was still able make it to the Marina and taken out to sea onboard “Lucky Strike”. Unfortunately, the winning yacht had already made its way to the Marigot Bay as it could not anchor inside the Island Global Yachting (IGY) Marina Bay.

The Minister took a time out upon his return to shore to speak to members of the media.

He said, “It’s a tremendous crossing and a record-breaking crossing. It’s always good when records are broken and Saint Lucia will be mentioned in the same sentence of a great feat when the story will be told the world over. We are very pleased and I want to congratulate the crew members on their brave record-breaking effort.”

Fedee added, “It means a lot in terms of publicity, as well as for the ARC. This is a serious event for which serious sailors from around the world are coming. I think it establishes a bit more when sailors the world over will be seeing that you have people breaking records crossing the Atlantic. It’s incredible, it’s tremendous. It’s a great way to start the ARC, and it’s a great way for us to begin to tell the story and penetrate the message into the various communities. The 18-man crew has proven that they are champions and it really does establish the ARC.”

Fedee further said, “There are new things we will be doing to make sure we go into more communities; we are going into Anse la Raye this time around. It’s a new community on the agenda and the Tourist Board will certainly look for more opportunities to spread and decentralize the event so it can go to many communities as possible.

“It’s amazing what has happened in places like Laborie, for example, where the community has actually come together and taken the bold step and established their village as a yachting destination. We would like to see more of that, where people take the initiative on what the government, the private sector and foreign investors have already built and make businesses to help the tourism industry with a diverse product.”