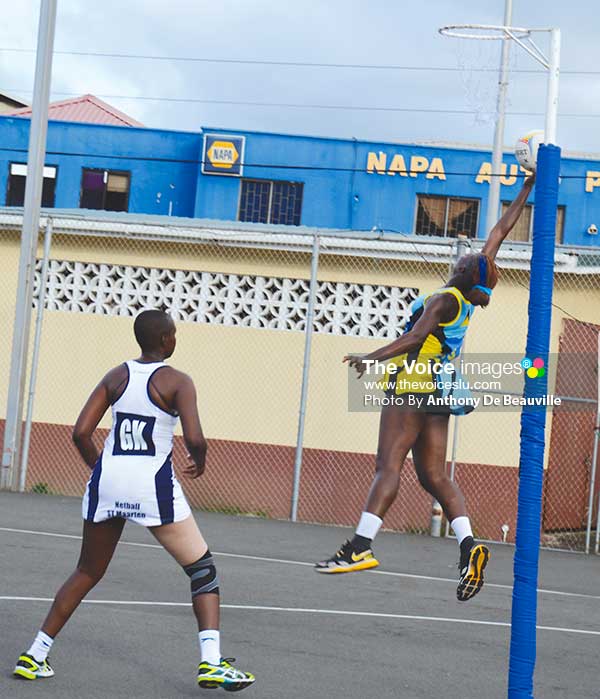 SAINT Lucia senior national netball team made a clean sweep of the three-match tournament against much-fancied Saint Maarten netball team at the weekend.

Following Saturday’s 67 – 17 victory in the second Test and a 66 – 20 on Friday opening night St Lucia rounded off the series Sunday defeating the visitors 65-19 in the final Test.

On Sunday, Saint Lucia, ranked twenty third on the International Netball Federation listing again proved too much for the visitors after lively exchanges at the beginning in a fast paced first quarter; Saint Lucia scored the opening goal and ran to a 7 – 0 lead as Saint Maarten failed to handle the Fair Helen’s quick-fire passing.

With Saint Maarten on the back foot, Saint Lucia was relentless despite numerous errors. The home side kept up the pressure with Shem Maxell at goal shoot, IannaHippolyte at goal attack and Kamala Mangal (substitute) at goal shoot enjoying success at the net, much to the delight of a small crowd mainly of students from the Micoud Primary School.

Saint Maarten’s main contributors were Stacy Ann Van Jersel Taylor who shot 7 from 11, Woodyer 12 from 18 and Landfort 1 from 3.

Following the encounter the Saint Maarten Head Coach Desmond Seymore spoke to the VOICE about his team’s performance: “It’s a learning process for us, because we just started playing internationally. I can’t say specifically anything went wrong. This is our fifth game so we now have to go back to the drawing board and improve on our game.”

He continued: “We are a young team and we don’t play netball like the other Caribbean countries, because we don’t have tournaments per se. The only games the girls have are at training and despite the 3 – 0 defeat they all played well. We travelled to Saint Lucia with limited players and throughout we had to change the players in different positions.”

“Sponsorship to develop the sport in Saint Maarten is not a problem. We don’t have a netball programme within the school system like Saint Lucia. Most of the players playing the game in Saint Maarten are from Jamaica, Saint Lucia, Barbados and Saint Vincent and the Grenadines.”

Seymore said: “Upon returning home our aim is to build the team for the future and get more girls involved in netball.”

Coach of the Saint Lucia team for the series Mary Ann Martial-Montoute believes the work the 13 girls put in during the various training sessions preparing for the series paid off as they were the ones who were consistently coming to training.

She added: “I mentioned to the players that even if they won and won convincingly the quality of netball had to be at an all-time high. In Game two played on Saturday I was not pleased with the quality as there were too many calls against them for stepping and contact. In Game three we had a similar situation, but it was not as bad as Game two.”

The Coach said: “Despite Saint Lucia making a clean sweep, it was a team effort and I commend the ladies for their victory and playing as a unit.” But she singled out Captain Maxwell for her outstanding performance throughout.

She said: “AaliyaEstephor, a student of St. Joseph’s Convent and the youngest player on the team at 14 years old did very well when she was given the opportunity to play so the future of netball look pretty bright.”

Saint Lucia will be hosting the Caribbean Netball Association Tournament in 2017.