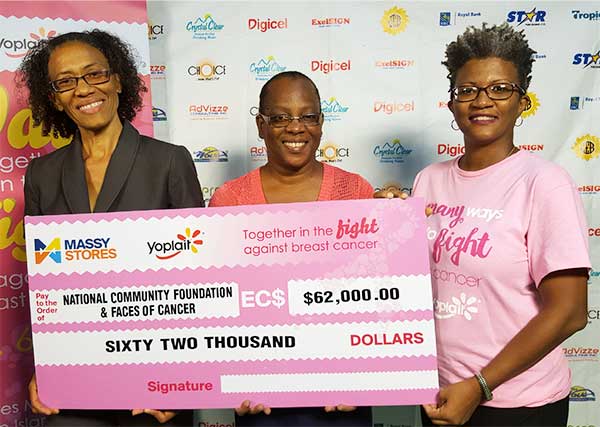 FACES of Cancer, a local cancer support organisation and the National Community Foundation are now better placed to assist women who rely on their organisations for assistance to manage breast cancer related issues.

Thanks to another successful Breast Cancer Awareness Campaign organised by Massy Stores (SLU) Ltd. and Yoplait. Last week the two organisations were presented with cheques representing the EC $62,000 raised from the two main activities which make up the campaign – the Massy Stores/Yoplait Walk and the in store Promotion on Yoplait yogurts.

The National Community Foundation receiving $43,400, while the Faces of Cancer Support Group received $18,600 of the total sum.

The Massy Stores and Yoplait Breast cancer campaign, in particular the Cancer Walk is a very resource intensive undertaking to which many give generously of their financial resources, time and also expertise through volunteerism. The retail company says it is extremely happy to be in a position to undertake the activities in support of these hard working organizations that commit year-round to cancer awareness, advocacy, treatment and care.

Highlighting the work of the two recipient organisations, Sariah Best- Joseph, Head of Marketing and Corporate Communications noted that theirs is no easy undertaking, which requires not only a level of business acumen but is also physically and emotionally draining.

She said: “We present these cheques today on behalf of sponsors, partners, the media, collaborators, customers and our staff, whose continued commitment to this campaign makes this possible. When we look at the work that Faces of Cancer does for its members and the level of selflessness that’s involved we consider it an honour and a privilege to lend our support to this work.

Madonna Monrose, Executive Director of the NCF explained that 18 women were able to benefit from the funding received through the 2015 campaign. She welcomed the 2016 contribution noting the many expenses associated with the disease and that the number of women who continue to contact the office for support is on the rise. She praised Massy Stores for its continued contribution to the NCF which is not confined just to breast cancer assistance.

“Apart from funds from this activity we receive an annual contribution of $25,000 every year from Massy Stores (SLU) which makes the organisation one of our biggest donors,” she said.

Next year 2017 will mark the tenth anniversary of the Massy Stores and Yoplait Campaign. The company hopes to start planning very early, to make this one, an even better financial success.