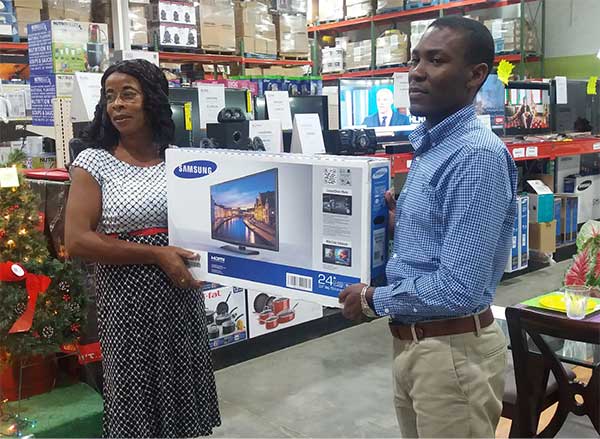 MASSY Stores Mega has gotten into the true spirit of Christmas with a number of donations all in one day, to kick start their Christmas corporate giving initiative.

The gift giving event was held at its Choc location on Wednesday morning.

Sariah Best-Joseph, who is the Divisional Head Marketing and Corporate Communications at Massy Stores Ltd, made the first presentation to the Salvation Army who they partnered with on a number of the charitable organisation’s activities for 2016.

Best-Joseph said: “The relationship with the Salvation Army is not new. We have enjoyed a really good relationship with them over the years, but this year, we are more involved. We made a donation to their massive hamper drive, which they plan to do. Over 800+ persons are expected to benefit from this hamper drive. Also we have agreed, and they’ve started already, the kettles of the SA, which are conveniently located outside all of our stores. In fact, at Massy Stores Mega, the kettle is on the inside, and we want to encourage customers to make donations, because this is the way the Salvation Army is able to support the needy.”

Best-Joseph revealed that the company was not only planning on helping the Salvation Army out with their food drive, but they were also taking part in a massive toy drive that will surely raise the spirits of hundreds of children across the island for the Christmas season.

The Divisional Head said: “Recognising that we have 1200 staff members across 14 locations, we’ve challenged each location to provide toys to the drive. So we have strategically placed boxes at every single location, and staff have started bringing in the toys. As part of the challenge, the location with the largest box of toys is going to get something special.”

The toy drive which has already commenced is due to end on December 9th and will be presented to the Salvation Army three days later.

Captain Derek Mitchell of the Salvation Army was present to gratefully accept the donation for the food drive.

As if that was not enough, the company embarked on one more act of kindness that will undoubtedly bring joy to the lives of more children.

In addition to their food and toys initiative to the Salvation Army, Massy Stores Mega donated a 24 inch Samsung television set and a transformer to the Administrator of the Ciceron Day Care Centre, Ruby Baptiste.

This initiative falls under the company’s Christmas corporate giving initiative where they spread cheer by making donations to a number of charities and institutions, including schools and non-profit organisations.

Purchaser at Massy Stores Mega, Elvis Joseph said: “It’s with a warm heart and very happy emotions that we give her this gift, because we know that she is doing a lot for the next generation.”

In response, the Day Care Administrator responded with sincere and heartfelt gratitude.

Baptiste said: “We want to have educational programmes for our children, hence the reason we have asked for help for the Ciceron Day Care Centre. We want to have movie days that the children could sit and enjoy. They never had it before, hence the reason we decided to take one step forward in having to go a long way in helping to educate our children.”

Baptiste assured the staff of Massy Stores Mega that their donation would be treated with respect and due diligence. She said: “We will not leave it there for thieves to enjoy. I know that it will be kept under heavy security, so we want to thank you again for blessing our hearts. May the Lord richly bless you.”