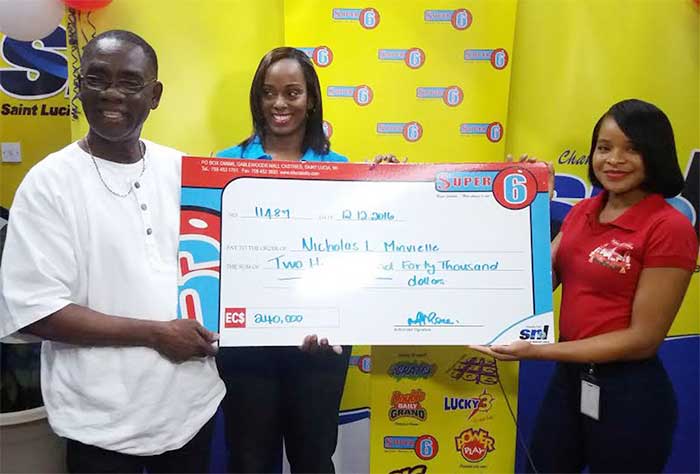 AS the year draws closer to an end, there is seemingly no end in sight to the huge payouts being made to lucky St. Lucians by the St. Lucia National Lottery.

Nicholas Minvielle’s Christmas came early on Monday morning when he was handed a cheque for $240,000 after winning the Super 6 jackpot. He was the third local big winner in the space of just weeks, after two players were awarded prizes of $350,000 and over $100,000 two weeks ago.

Draws and Marketing Officer at SNL, Solange Aimable said: “As of late, we’ve been seeing a trend with a lot of St. Lucians winning, so we’re very excited.”

Monday’s lucky winner said on the day of the draw, he never looked as he hates watching the events; however, he sent his son to retrieve the results the next day and was stunned and elated that his numbers had been called.

Minvielle purchased his ticket at the Castries SNL office, but said he is well known in all ticket outlets in Castries. He said the retailers had predicted that he would win big as he spends so much on tickets. A regular player of the Super 6 game said he always knew his day would come: “I was expecting it one day but it came and I’m still excited that I won.”

When asked about his plans for his winnings, he said: “I’m going to take care of my son’s college with it and I’m going to do some charity work. I have already spoken to God and said I’m going to give away some money,… ..trust me. It’s not because I won the lotto, I do this all the time so, it’s not a strange thing for me.”

Minvielle said he always encourages his closest friend, who is an avid Lucky 3 player, to try his luck with Super 6 because the winnings are way higher.