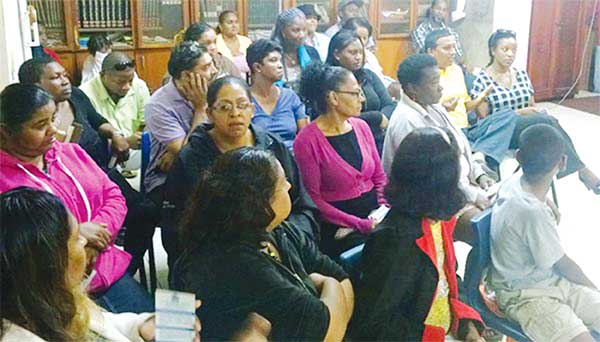 74 Lots To Be Made Available.

THE National Housing Corporation (NHC) is looking at the development of house lots in Forestiere as the vehicle through which it will dig itself out of the financial mess it presently is in.

The Corporation is in a position where it cannot pay its bills due to several matters before the courts arising from deals and agreements with contractors and companies that either did not materialize or fell through leaving the Corporation to deal with the expenses generated.

But Chairman Timothy Mangal is not predicting liquidation of the Corporation. He stated that the Corporation, as a statutory body, is an important arm of government in providing affordable homes for the country’s citizens and so it will do everything in its power to stay solvent.

“The position is not to close NHC but to proceed ensuring that we move from that peak up to a level playing field,” Mangal said.

The Corporation’s first move towards solvency is to ensure the profitability of the Forestiere Development Project which involves the preparation of 74 house lots of roughly 5000 square feet each to be sold at $10 a square foot.

“In the Forestiere project we’ve taken a different approach. We have gone with a fixed price contractor therefore we have been able to determine the development cost of the project which is lower than any other development projects,” Mangal said, adding that as long as the cost of development could be maintained and the properties are sold out the NHC could see a profit in the venture.

However he warned that the sale of properties will be on a first come first serve basis.

“We will not be holding land for someone because of political affiliation,” Mangal said when asked whether nepotism may play a part in the sale of the lots.

“All we are concerned about is a person’s ability to pay,” he added.

Mangal, a former member of the St. Lucia Labour Party (SLP) who changed political allegiance prior to the June 6 general elections by joining his once political rival, Guy Joseph of the United Workers Party (UWP), to criticize the Labour Party Government headed by Dr. Kenny Anthony.

He also added that the NHC will be looking at whether persons presenting themselves as prospective buyers are first time landowners. He explained that after the screening of potential buyers they will be issued letters with a disclaimer stating that the letter from the NHC does not guarantee them a lot.

“They will have to satisfy requirements that they are able to pay for those lands,” Mangal said, adding that to do that interested persons must present to the NHC evidence of their ability to purchase the lot either by a letter of intent from a bank, a bank statement indicating he/she has the cash to purchase or other types of evidence.

He further explained that the prospective buyer would have to deposit 10% of the cash value of the lot to the NHC which will then go into an agreement with the buyer within which the buyer agrees to purchase the lot within 90 days.

“Should you renege on your promise to purchase within 90 days you will lose your deposit, or if the vendor (NHC) reneges the vendor will have to be repaid double the deposit,” Mangal said, admitting that the NHC may just hold five percent of a potential buyer’s deposit instead of the entire amount.

Seventy-four lots are under construction at Forestiere, up from 43. The lots, however, are smaller in size (5000 square feet) down from the 7,000 square feet to 8,000 square feet they once were when they numbered 43 in total.
The NHC has over 100 applications presently from persons seeking to purchase a lot in that development in the Castries Southeast Constituency.