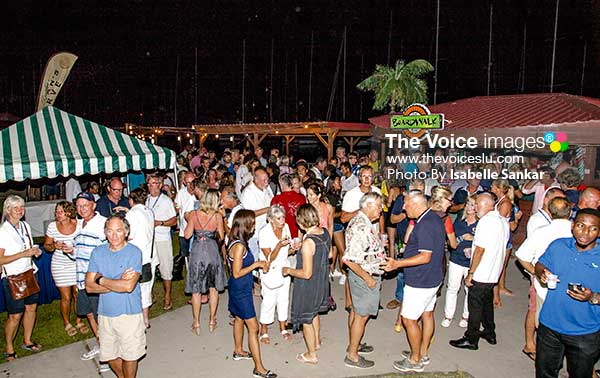 A warm Saint Lucian welcome has officially been extended to the sailors who have braved the high seas and successfully finished the 2700 nautical mile trans-oceanic ARC race from Las Palmas de Gran Canaria via the Cape Verde Islands to the IGY Rodney Bay Marina.

On Sunday evening, steel pan music to the tune of well-known Christmas hits by local artistes filled the marina air entertaining over forty ARC+ yachts and ARC crews who are already on island. The event would not be complete without a kick of locally made rum punch and delectable treats packed with a generous dose of St Lucian flavour.

In his brief remarks, Tourism Minister Dominic Fedee welcomed the sailors to St Lucia and encouraged them to indulge in all the local enticements. “Don’t hesitate to enjoy the scenery, the food and our warm Saint Lucian hospitality,” said Minister Fedee, “and most of all our St Lucian rum!”

Similarly, General Manager of World Cruising Club Andrew Bishop also expressed delight about hosting the sailors who had already finished the 4th edition of the ARC+ and his anticipation for those still en route. While close to 60 ARC+ contenders have crossed the finish line, officials are keeping a close eye on the ARC yachts which are expected to steadily arrive at the IGY Rodney Bay Marina throughout this week.

Meanwhile, as the Saint Lucia Tourist Board (SLTB) celebrates the record-breaking victory of the first ARC vessel to finish the trans-Atlantic crossing, excitement is building over the anticipated arrival of dozens more who have braved the high seas in an attempt to complete the race.

Last Thursday , the SLTB hosted a press conference in an effort to introduce the 2016 Calendar of Events to the general public. The press conference was led by Executive Chairperson, Agnes Francis; Minister of Tourism Dominic Fedee; General Manager of IGY Marina, Sean Devaux; and Managing Director of World Cruising Club, Andrew Bishop.

Beyond the well-established welcome and prize giving reception, some highly-anticipated events will include a Seafood Fiesta to be held in Anse la Raye next week, a Rotary Tree Planting, an Ex-tempo Calypso Party, and the ARC Market that will feature an array of local farmers and producers.

Throughout the ARC, the IGY Rodney Bay Marina will be host to a varied and exciting schedule of entertainment that will be open to the general public and will take place along the Marina Boardwalk culminating on Sunday, December 18 with Christmas Carols on the Boardwalk.

The SLTB is proud that growth in the industry has invigorated interest in the marine sector and excited to see the island develop as a prime destination for travelling yachtsmen.