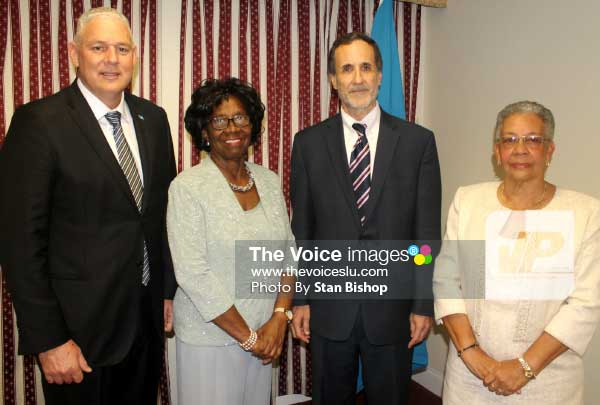 DR. CHARMAINE Gardner, a well-known figure in the business community, has been appointed Honorary Consul of Israel in Saint Lucia.

Dr. Gardner, who has an extensive career in the field of banking and being involved in social issues such as advocating for HIV/AIDS awareness, a women’s shelter and the Saint Lucia Crisis Centre, seemed the perfect pick for Ambassador of Israel to Saint Lucia, MordehaiAmihai-Bivas, who was in Saint Lucia this week.

“Knowing that in my absence Israel will be represented by Charmaine gives me peace of mind,” said Ambassador Amihai-Bivas, who is based in New York. “The responsibilities – and I hope some pleasures – of being an Honorary Consul could not be in more capable hands.”

Ambassador Amihai-Bivas said Israel values its bilateral ties with Saint Lucia due in part to the countries’ shared values. He said Saint Lucia’s respect for human rights, press freedom and rule of law affords its citizens the very highest degrees of democracy, a mark of distinction that should be treasured.

“It is, therefore, especially fitting that our two countries are forging this stronger link with the appointment of Charmaine as Honorary Consul,” Ambassador Amihai-Bivas said. “I have every reason to believe that this will lead to broader and deeper ties in the coming years.”

Governor-General Dame PearletteLouisy, Prime Minister Allen Chastanet, resident ambassadors, honorary consuls and other specially-invited guests were present at the short ceremony to exchange pleasantries with Dr. Gardner, who pledged to strengthen the bonds of friendship between the two countries, including greater cooperation in key areas of development.

“Israel is a remarkable country and I’ve always followed its history,” Dr. Gardner said. “We can learn a lot from Israel and I sincerely hope that I can engage many people in the process towards forming collaborations from which both countries can benefit.”

Prime Minister Chastanet also spoke at the ceremony, saying Saint Lucia stands to benefit immensely from its Middle Eastern partner. In the areas of security and agriculture, he said, Saint Lucia has benefitted greatly from Israeli expertise. He said the strengthening of bilateral ties aims to go beyond that.

“We’re now hoping to develop a relationship that goes past security and agriculture,” Chastanet said. “We’re also looking towards having water desalination plants here, which is the alternative being sought by other small island states.”