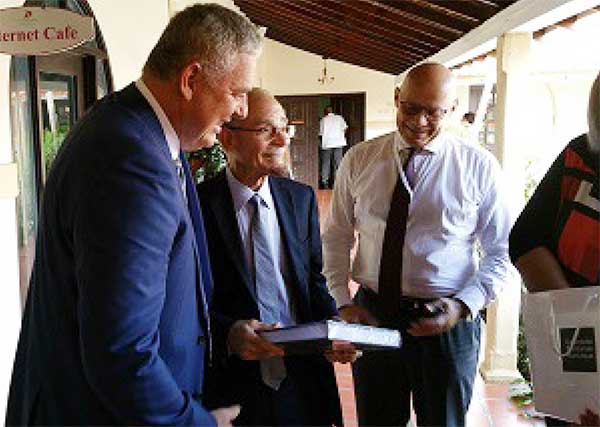 ST. LUCIA yesterday called for greater collaboration with the French Caribbean territories as they map out strategies for socio-economic development projects that are to be funded by the European Union.

Addressing the final day of the INTERREG V Caribbean, a multi-million dollar EU funded programme aimed at boosting the economic competitiveness of regional countries, Prime Minister Allen Chastanet said that it was imperative for there to be closer collaboration among the French and English-speaking Caribbean countries given the changing global landscape.

“We must recognise that in this region while we all have influences of larger international countries, the solutions to our problems have to come from this region. It is us that know what our problems are and it is for us to be able to design that solution”.

Prime Minister Chastanet said it is in this spirit he embraces the INTERREG cooperative agreement.

“The dialogue has to come from here and that the scale of our countries will help us determine the best way forward. If we try to bring policies from outside the region to impose them in this region they will not work. They have to be homegrown.”

He said it was also very critical for the countries in the region to be able to operate at the international level, saying “it is sometimes the voices of the smaller islands, the Martiniques, the St. Lucias, the Dominicas, theGrenadas which can bring solutions to global issues”.

Chastanet told the conference one of the projects that need “our urgent attention is the situation with global warming.

“But the reality is that the developed countries emissions are having an impact on our environment and that impact is jeopardising the sustainability of our countries and it needs urgent attention.”

Chastanet said St. Lucia over the past 10 years has had two hurricanes and two storms with the strengths of these weather systems being “something that would have happened once every 100 years.

“Our infrastructure cannot cope. I think the Prime Minister of St. Vincent (and the Grenadines Dr. Ralph Gonsalves) puts it very well. A bridge is damaged, he borrows money to build the bridge , another storm comes, damages the same bridge, he is not even paying for the bridge and now he has to pay money again to get the bridge.

“And to show you how slow things are, we had Hurricane Tomas in 2010 and we still have projects that are waiting for funding from the World Bank,” Chastanet told the conference.

He said that he was taking the opportunity of the EU representative at the meeting here “to make the appeal and I must indulge on the support of Martinique and Guadeloupe and the other French territories in this region to assist us.

“We have a lot to learn from each other. The Caribbean would not be the same without the integration that we have.” Chastanet said, assuring the conference of the support of the sub-regional Organisation of Eastern Caribbean States (OECS) for the INTERREG programmes.

The budget for the INTERREG V Caribbean has been increased to Euro 86 million from Euro 63 million of which Euro 64.1 million is financed by the European Regional Development Fund (ERDF).

According to an official statement issued here, the main objective of the INTERREG Caribbean 2014-2020 programme is to strengthen Caribbean partnerships by “strengthening the economic competitiveness of the greater Caribbean, respond to common challenges of environmental and health issues and promote our joint cultural heritage of the region”.

The programme is based on several priority components including employment and innovation, natural hazards, the natural and cultural environment, public health and renewable energies.

President of the Collectivity of Martinique, Alfred Marie-Jeanne, echoed Chastanet’s call for greater collaboration among the French and English-speaking countries.

“It is also about ascertaining our common willingness to develop our continent,” he said, adding that “the political will must transcend the financial commitment”

The senior French official said cooperation is also necessary so that ideas could be discussed and burdens overcome.

He said that the feedback from the 2007-13 programme has “led us to establish a stronger partnership in INTERREG V,” even as he insisted “this programme cant be the only way for us to meet…and strengthen our cooperation”.

He praised the EU for funding the programmes and urged the countries to make full use of the initiative adding “otherwise what significance our cooperation will have.

“Now INTERREG V is being launched. I hope it will not be in vain,” he said, promising that Martinique “will seek to be the leader for the cross border programmes”.

He said the definition of “Team” meant T is for together, E is for everyone, A is to achieve and M is for me. Together everyone achive much more,” he told the conference.

The head of cooperation at the European Commission, Andrea Mairate said it was important “to work together to achieve active participation from the programme.

“We have to show that we will. I am quite sure there is a lot to do…and I am sure we can achieve efficiency and we will be able to show concrete results,” he added.