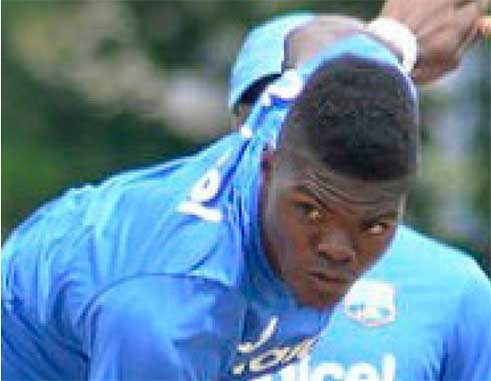 ST. JOHN’S, Antigua – The West Indies Cricket Board confirmed that Alzarri Joseph and Nikita Miller were fined, and Roshon Primus was reprimanded for breaches of the Code of Conduct during the fourth round of matches in the Digicel Regional 4-Day Tournament which ended on Monday.

All three players admitted to the offences and accepted the sanctions proposed by the respective match referees, meaning there was no need for formal hearings.

Joseph was reported by on-field umpires Danesh Ramdhanie and Leslie Reifer Jr, along with standby umpire Ericson Degallerie for a Level 2 breach of the Code of Conduct during the match between Leeward Islands Hurricanes and Windward Islands Volcanoes at Windsor Park in Dominica.

Joseph upon fielding the ball from his own bowling after the final delivery of the 18th over in the Volcanoes’ second innings, threw the ball at or near batsman Johnson Charles in an appropriate and dangerous manner while the batman remained in the crease.

Match referee Carlyle Felix imposed a fine of 50 per cent of the Hurricanes and West Indies fast bowler’s match fee for the breach of paragraph 2.6 of the Code of Conduct.

Miller and Primus were both reported by match umpires Verdayne Smith and Gregory Brathwaite, as well as reserve umpire Rushane Samuels for Level 1 breaches of the Code of Conduct during the match between Jamaica Scorpions and Trinidad & Tobago Red Force at Sabina Park in Jamaica.

Match referee Denovan Hayles imposed a fine of 20 per cent of Miller’s match fee, after he breached paragraph 1.3 of the Code of Conduct by using language that was offensive or insulting to the match officials and contrary to the Spirit of the Game, when he was notified about the wearing of incorrect playing equipment.

Primus was subject to an official reprimand from Hayles, after he showed dissent at the umpire’s decision by delaying his departure from the wicket, when he was adjudged lbw off the final delivery in the 56th over of the Red Force second innings.

The Red Force all-rounder admitted to the offence which was a breach of paragraph 1.2 of the Code of Conduct and accepted the imposition of the proposed sanction. No further action was taken and no hearing was required.