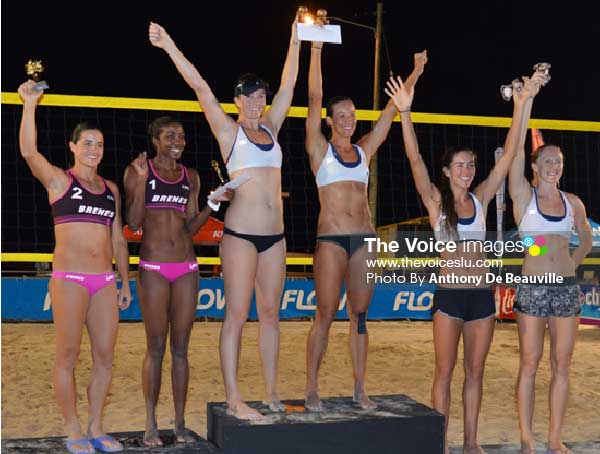 THE 10th stage of the NORCECA Beach Volleyball Circuit ended at Pigeon Island on Sunday evening in front of an appreciative crowd of fans as Emily Stockman and Caitlin Ledoux and Stafford Slick and Mark Burik of the United States captured the women’s and men’s titles respectively for the United States.

In the women’s category, Stockman and Ledoux defeated Karen Cope and Natalia Alfaro of Costa Rica (21-19, 21-13). The first set was a thriller as it was a well-fought one with the Costa Ricans coming back from being down 16-9 to lose 21-19. In the second set, the Americans breezed past their opponents, winning 21-13.

Sunday evening’s win was the second title in a row at Pigeon Point for Ledoux, who won last year’s title with Irene Hester as her partner. This time around, Hester partnered with Emily Day and took the third place silverware by defeating Megan Nagy and Marie Christine Lapointe of Canada in straight sets (21-17, 21-17).

In the men’s final, the American pair of Slick and Burik won over Cameron Wheeler and Michael Plantinga of Canada with scores of 18-21, 21-17, 15-13 for the fifth consecutive title for teams from United States in Saint Lucia. The duo recovered after losing the first set and an 8-4 deficit in the second set to the Canadians who were heavily supported by a large section of the Saint Lucian crowd.

Home team Saint Lucia failed to make a podium finish in either of the categories, but took a bow when Team A comprising Joseph Clercent and Darrell Eudoxie was defeated by USA’s Mark Burik and Stafford Slick in their quarterfinals match-up (21-14, 21-16). However, the pair went on to defeat Arnoust Baptiste and Lavoye Cedric of Guadeloupe (21-12, 20-22 and 15-13) to earn fifth place.