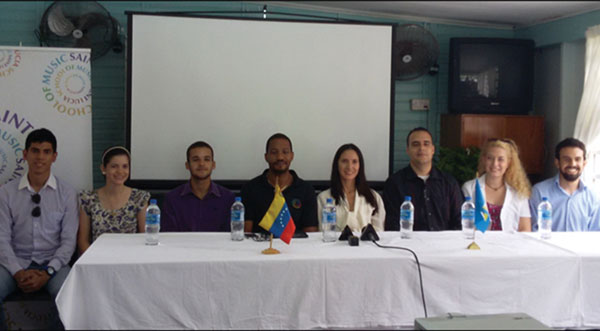 Their visit is part of the continuing collaboration between the Bolivarian Republic of Venezuela and Saint Lucia (ongoing since 2013) promoting cultural interaction between the two countries.

The collaboration was initiated by the Bolivarian Government through the National System of Orchestras and Youth Choirs of Venezuela (better known as ‘El Sistema’), the Venezuelan diplomatic representatives here and the Saint Lucia School of Music.

Throughout the ten weeks of the IV Intensive Musical Training Workshop (2016), young Saint Lucians will, through this action of the Saint Lucia School of Music, strengthen their musical skills, allowing for further progress in the consolidation and development of musical appreciation in this country.

On the morning of Thursday, October 6, the Venezuelan Ambassador, H.E. Leiff Escalona, along with the Director of the Saint Lucia School of Music, Richard Payne, and the six music teachers from “El Sistema” held a press conference to publicize the schedule of activities for the upcoming weeks. 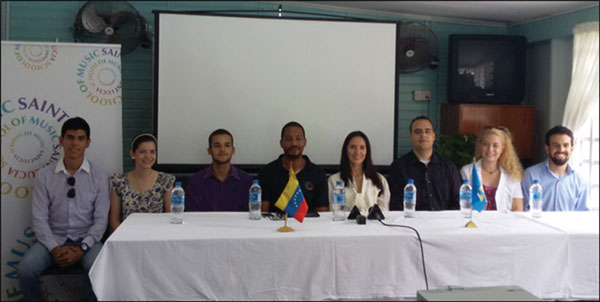 The Head of Diplomatic Mission stressed to the media the importance and impact that “El Sistema” has had in Venezuela.
“Thanks to the support of the Bolivarian government, more than 787,000” children and adolescents mostly from lower income households, have benefited from the study of music.

“Today we have six young teachers who have extensive experience in the method of individual and group instruction in music, and who are part of the Symphony of Orchestras and Choirs in our country, and have more than a decade of study, practice and teaching in the world of classical and traditional music. It is an honour to have them here with us today,” concluded the Ambassador.

For his part, the Director of the school of music deeply thanked the Government of Bolivarian Republic of Venezuela and its embassy in Castries for giving him the opportunity to witness the methodology used – and the impact of – the National System of Orchestras in Venezuela.

Payne added that: “This project uses music as a vehicle for social change. It is a privilege for us to continue strengthening this bilateral relationship. In addition, we are proud, because we are the only Caribbean country that has established this direct relationship with the System.”

Finally, in concluding the press conference, the Venezuelan Ambassador invited the media present to view a recording of part of the Beethoven’s Fifth Symphony which was performed in the Cathedral of the Immaculate Conception by more than 250 musicians – Saint Lucians and Venezuelans – on stage together in concert as the highlight of the work achieved during the 3rd intensive training workshop which took place in July, 2015.