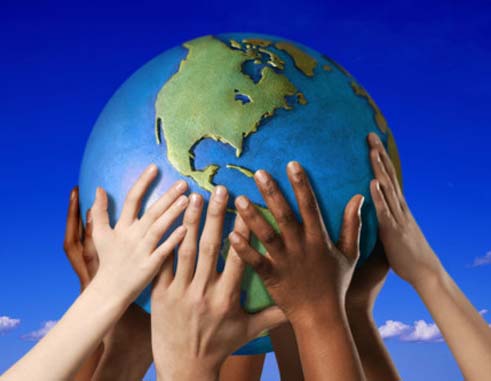 Global warming and the El Niño phenomenon have contributed to record-breaking temperatures and extreme weather events around the world. In July this year, the global average temperatures taken over land and ocean surfaces were the highest for any month in 137 years of record-keeping.

In June, the temperature in Taipei, Taiwan reached 38.7 degrees Celsius, the highest in a century. Another recent anomaly is a marked decline in the frequency of steady rainfall.
Instead, we were hit with a series of torrential downpours that caused many flash floods, significantly damaging our infrastructure, ecosystem, as well as crops. More and more evidence is showing that climate change is already happening. If we don’t take action now to reduce greenhouse gas emissions, we will end up paying much more later on.

Unbounded economic growth and excessive exhaust have led to climate change which threatens human survival. Governments around the world realize this, and that’s why the landmark Paris Agreement was adopted in December 2015, bringing all nations together under a common cause that drives global mitigation actions with long-term goals. Climate change is arguably the single-most important issue that put the future of humanity at stake.

As a member of the international community, Taiwan cannot be a mere spectator to this problem and must come up with feasible solutions to live up to the name of Formosa, “beautiful island”.

We enacted the Greenhouse Gas Reduction and Management Act in July of last year, setting our long-term target to reduce our emissions by at least 50% below 2005 levels by the year 2050. Taiwan is among only a few countries in the world that have written into law a target for reducing greenhouse gas emissions.

Additionally, we have come to realize the need to further increase our energy efficiency and promote energy conservation, transform our industrial structure, as well as diversify our energy supply by tapping into renewable energies, such as solar, wind, biogas production using pig farm waste based on the concept of circular economy.

We anticipate that by 2025, 20% of our energy will come from renewable energy. We have also established under the Executive Yuan the Office of Energy and Carbon Reduction whose main task is to plan overall national energy policy and promote conversion to newer forms of energy as well as greenhouse gas (GHG) reduction. The office coordinates efforts among government agencies and also establishes partnerships between the central and local governments to reduce carbon and develop clean energy.

In her inaugural address earlier this May, President Tsai Ing-Wen made it clear that Taiwan will not be absent from the global efforts to mitigate climate change and that her government will regularly review goals to cut greenhouse gas emissions in accordance with the Paris Agreement.

With this ambition, we enacted the Greenhouse Gas Reduction and Management Act, with periodic five-year regulatory goals that help enhance climate-change response capacity building and promote efficient management in reducing greenhouse gas emissions across government agencies. This approach is in line with the goals of the Paris Agreement which encourages all countries to strengthen their determination to reduce emissions with the aim to achieve the long-term goal by the year 2050.

We only have one Earth and there is only one Taiwan. Therefore, we cannot take the issue of climate change lightly as we proactively respond to and support global initiatives. Climate change is a global issue that transcends national boundaries. The actions we take today could have profound impact on the lives of future generations. Climate change requires not only national but global solutions. That is why governments cannot do this alone.

I sincerely urge the international community to recognize and support Taiwan’s determination to gain meaningful participation in the UNFCCC and become part of the global climate network. We are willing to share our environmental protection experiences and contribute to international efforts. Together with friendly nations, we will join hands to safeguard a sustainable earth.