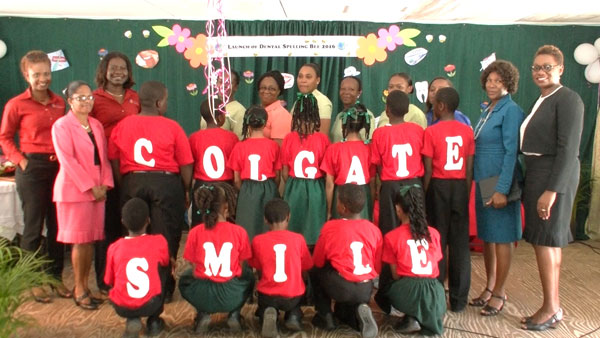 Pierrot Combined School in Educational District 6 is the place where champion spellers are born.
That was the message delivered by Principal, Eugenie Paul-Moonie, as she welcomed officials from the Ministry of Health and Education as well as Colgate brand representatives during the launching ceremony of the 2016 National Dental Spelling Bee competition as part of the activities in recognition of Dental Health Month held in October.

The competition, now into its sixth year, is targeted at Grade 3 students throughout the island. It has been sponsored entirely by Colgate with the aim of sensitizing children about dental care and hygiene.
Dr. Sherry Ephraim-Le Compte, Senior Dental Surgeon in the Ministry of Health, says the activity is designed to encourage self-development and self-discipline among students.

“It is not just a matter of just spelling of words. This initiative is to raise an awareness of everything dentistry — the careers in dentistry and the words that are used. It helps with the diction, phonics and also the research skills of the students because they see a word and they don’t just dismiss it. But they do their research. What is this, what does it mean? How is it being used, what is the reference of it? And this carries into the other subject areas of the students,” Ephraim-Le Compte said.

The competition, which involves participants from all primary schools, is an exercise which promotes students ability to spell proficiently and to establish reading as the foundation for all learning.
Mrs. Isla Sammy is the Acting District Education Officer for Zone 6 supervising 15 schools from Desruisseaux to Vieux Fort.

“Spelling competitions help students improve their spelling, broaden their vocabulary, learn new concepts and develop correct English usage. It also forces them to pay attention to pronunciation, definition of words, and so on. When all of these skills are mastered it leads to an increased ability to read fluently, which is what we are all striving for.”

Colgate Brand Manager, Keneene Betty Forde, says they are very pleased with the outcome of the competition over the years and will continue to invest in the education and health of the students of the nation. She detailed the prizes which the winners will receive at the end of the competition.

“We actually give tablets to the winners at the end of the competition. There is a final prize of $1000 for the winning school which is also covered by Colgate. We have sponsoring brands, such as Anchor, which contributes in terms of the refreshments. But in terms of the activity from beginning to end, we work closely with the ministry as well and the dental care unit and we are totally in charge of everything. We own the competition and we are very involved.”

Last year’s winner, eight-year-old Rohan Charles had a few words of advice for the participants in this year’s competition.

The first round of the competition is scheduled to commence in early November.