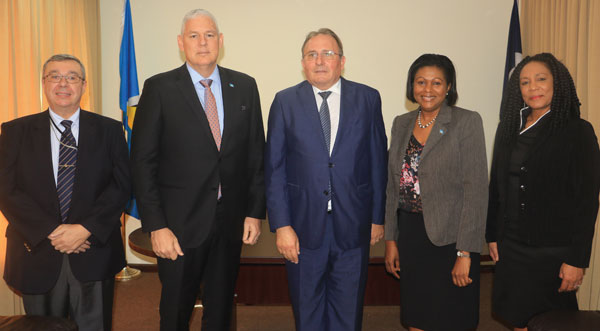 Saint Lucia and France have signed two agreements to aid both countries in criminal matters.

On Friday, September 30, 2016 the Mutual Legal Assistance Agreement in Criminal Matters and the Extradition Agreement were signed by the Prime Minister of Saint Lucia, Allen Chastanet, and the Ambassador of France, Mr. Eric de la Moussaye.

The intentions of the conventions are to prevent and suppress acts of terrorism. The signing also cements the relationship in the field of justice between the French and Saint Lucia.

The Agreement on Mutual Legal Assistance in Criminal Matters aims to develop cooperation between France and Saint Lucia for the purposes of preventing and combating crime, in respect of their constitutional principles respectively.

The Agreement provides that France and Saint Lucia grant legal assistance in key areas such as appearance of witnesses, searches, seizures and forfeitures.

The Extradition Agreement, which is the natural complement of the Mutual Legal Assistance Agreement, provides that the two parties undertake to surrender to each other persons on their respective territories, who are prosecuted or have been sentenced by the judicial authorities of the other State for extraditable offenses.
This is the first independently signed Extradition Agreement between Saint Lucia and the French Republic. The two bilateral agreements were borne out of the 5th Session of the Joint Security Committee between France and Saint Lucia which was convened on March 25, 2014.