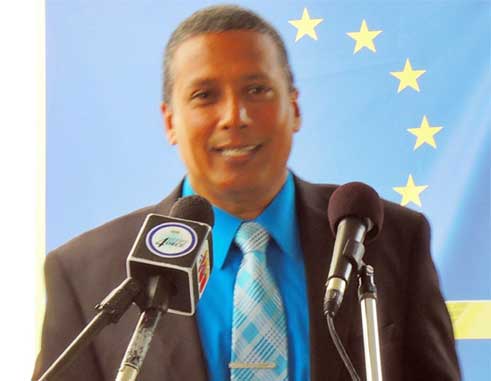 Acting Prime Minister of Saint Lucia and Minister for Economic Development, Housing, Urban Renewal, Transport and Civil Aviation, Guy Joseph, has expressed deep sadness at the devastation and massive loss of life visited upon Haiti as a result of the passage of Hurricane Matthew on Tuesday, September 4, 2016.

So far, Haiti’s post-hurricane death toll stands in the hundreds and the loss of property and infrastructure is recorded to be extensive around the worst-hit sections of Haiti.

Hurricane Matthew built considerable power after its passage over Saint Lucia as a tropical storm on September 28, 2016 and reportedly smashed into Haiti’s western peninsula on Tuesday, October 4, 2016 with 145 mph winds and torrential rains.

The Acting Prime Minister said Saint Lucia has dispatched a team of three trained persons to Haiti to assist and to do preliminary assessments in terms of how Saint Lucia can help.

“We are very saddened at the impact on Haiti. As we all know, Haiti has been affected in so many ways in the past; so many hurricanes and the major earthquake some time ago added to the day-to-day challenges the people of Haiti face,” said Joseph.

In the aftermath of the storm, several foreign governments and international agencies have been mounting responses to assist Haiti, including the United Nations.

Joseph said Haitians stand out for their resilience.

“I am sure in the coming weeks while we are dealing with our own issues, there would be other pronouncements after all the assessments are in from our team who are on the ground in Haiti. Saint Lucia stands with our brothers and sisters in Haiti and our prayers go out to them in this difficult time. On behalf of the people of Saint Lucia, we send our deepest condolences to the Government and people of Haiti.”