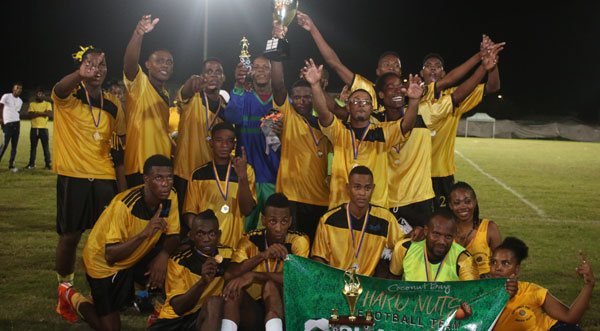 Coconut Bay “Hard Nuts” football team completed their dominance of the 2016 SLHTA Football Invitational championship when they defeated Sugar Beach in the final of the competition played at the Soufriere Mini Stadium at a night match on October 22, 2016.

The Hard Nuts football team humbled their opponents by a score-line of 3-1 during an exciting match which drew a large crowd of supporters from both properties. The defeat marked their second win over the Sugar Beach team whom they also met during the group stage of the competition.

The victorious Hard Nuts were cheered on not only by their enthusiastic staff members but also CEO, Mr. Mark Adams, and Hotel General Manager, Mr. Karl Hallberg, along with senior hotel executives who were all present.

Coconut Bay Beach Resort & Spa are extremely proud of this commendable performance and excellent achievement by their football team.

Adams, who is elated over the team’s success, says that this accomplishment has generated much excitement and pride in the general staff body which can serve to stimulate staff morale and motivation to excel. The hotel’s executives, CEO and owner will soon be organizing an appropriate event to adequately recognize and honour the triumph of the victorious team.