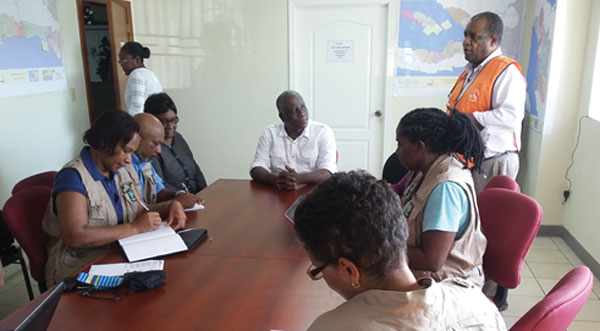 Six experts from the Caribbean Disaster Emergency Management Agency (CDEMA) drawn from the CDEMA Coordinating Unit and the Participating States of Saint Lucia and Jamaica are now stationed in Haiti to provide operational support to the Civil Protection Directorate (CPD) in response to the widespread devastation caused by Hurricane Matthew.

The experts are members of the CARICOM Operational Support Team (COST) and will provide support to coordination efforts in Jérémie and Les Cayes, two settlements most affected by Matthew. The team met with the Minister of the Interior and Territorial Communities, Francois Anick Joseph and Madame Jean Baptiste, Director of the CPD.

Hurricane Matthew ravished the South and Grand Anse areas of Haiti between October 3 and 4, 2016. The National Emergency Operation Centre (NEOC) has reported that the immediate needs identified include water, sanitation, cleaning supplies and roofing materials. The latest confirmed damage and injury report provided by the CPD on Saturday, October 8, 2016 indicated 336 fatalities, 211 persons wounded and 61,357 currently staying in temporary shelters.

The areas of major concern are the urban centers, coastal areas and the interiorm, specifically in the departments of Grand Anse, NIPPES and the South. The NEOC plans to conduct a helicopter reconnaissance to Jeremie and Les Cayes for the team on Sunday, October 9, 2016 to further assess the damages. The COST is tasked to make two departmental EOCs functional, one in Jérémie in Grand Anse and the other in Les Cayes in the South. The team will be stationed in Les Cayes.

At the request of the Government of Haiti, and based on priority needs identified, Emergency Operations support is being provided through the COST. In accordance with the Regional Disaster Response Support Doctrine, the COST was developed as the instrument to sustain the National EOC, where the capacity of a NEOC was overwhelmed, and assistance was required to support the national level coordination. The COST provides surge capacity to the NEOC and provides direct support to the impacted State within 24-36 hours after the initial impact. COST teams help to operate the EOC, compile data, generate information, coordinate resources both external and internal, as well as generate reports.