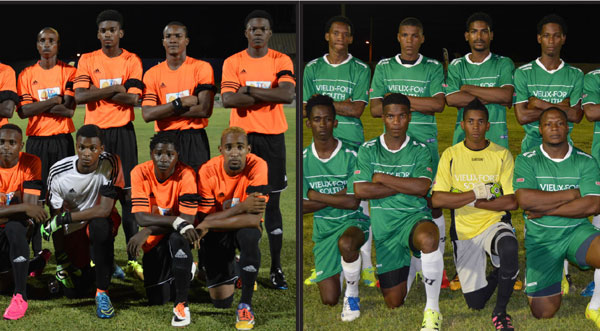 A massive crowd is expected at the Phillip Marcellin Ground in Vieux Fort today for the semifinals of the Blackheart football Championship. The action gets underway at 6:00 p.m.

Former champions Gros Islet with wins over Soufriere (1-0) and Mabouya Valley (6-2) will play first time semifinalist Marchand which defeated Vieux Fort North (3 – 1) and La Clery (4-2 in a penalty shootout after the scores were tied at 1-1 after regulation and extra time).

In what is expected to be a mouth-watering showdown from 8:00 p.m. former champions Canaries with victories over Anse la Raye (1-0) and Castries Central (1-0) will play second time semifinalist Vieux Fort South which defeated Castries South (4-0) and Micoud (4-2) in a penalty shootout after the scores were locked at 2-2 after regulation and extra times).

Assistant Coach for Gros Islet Daren Gaspard said his boys were ready for the clash with Marchand. He added: “Following our 6 – 2 hammering of Mabouya Valley in the quarterfinal round, the team immediately went back into training to iron out a few areas that were worrisome especially in the defence as the communication between the defence and the goalkeeper was lacking”.

He also noted that in today’s game Gros Islet will not be taking Marchand for granted as both will he playing for a spot into the finals.

Assistant Coach for Marchand Canice Dujon said: “It’s our first time making it into the semifinals so all eyes will be on us. We will be going out and give our best performance; we are ready for the showdown against Gros Islet.

Joint leading goal scorer (3 goals) for Marchand Lincoln Phillip said: “It’s not about me, it’s about the community. This evening the intention is go out there get the job done and make the entire Marchand community proud by defeating Gros Islet”.