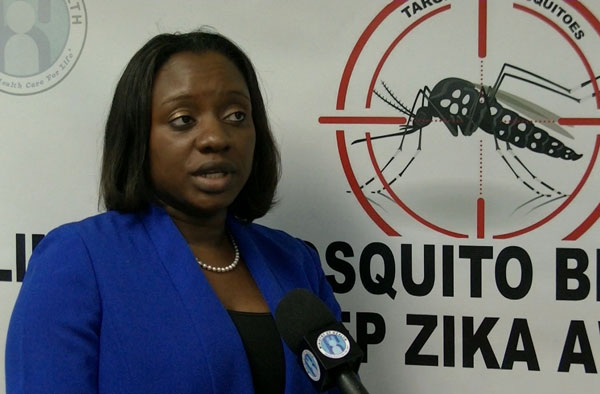 THE Ministry of Health and Wellness has intensified its surveillance for Zika Virus Disease particularly among pregnant women.

Scientific evidence has shown that not everyone infected with Zika exhibits signs, and symptoms and the virus has also been proven to be a causation of microcephaly and Guillain Barré Syndrome.

Acting Senior Medical Officer for Infectious Diseases and Surveillance Officer in the Ministry of Health, Dr. Michelle Francois said the surveillance for Zika Virus started from the time news was received that Zika was approaching the region. Francois indicated that surveillance is based on what is expected to be achieved at a particular point in the outbreak.

“The first thing we needed in our surveillance system was to determine whether we had any laboratory confirmed cases of Zika. Our testing strategy at that time was to test persons regardless of sex, age or background. We tested everyone because we needed a confirmed case to firmly say that we have Zika in St. Lucia.”

The ministry’s surveillance then focused on the regions most affected where many persons presented with signs and symptoms of the virus.

Dr. Francois added: “Once that had been accomplished the next phase now would be to identify the individuals who are most at risk and we have heard a lot about Guillian Barré Syndrome. We have heard a lot about the microcephaly in babies. These individuals, especially the pregnant women, are high on our priority list in terms of testing because of the complications of Zika. So right now pregnant women are being tested. Pregnant women who (show) signs and symptoms of Zika they would be tested. Individuals manifesting with the signs and symptoms of Guillain Barré they would be tested. Babies who are borne with microcephaly would also be tested.”

Dr. Francois noted that prior to Zika, cases of microcephaly have been recorded in St. Lucia. These cases however were unrelated to Zika. She said some individuals infected with Zika may appear to be asymptomatic or display no signs and symptoms of Zika. Thus it is possible for a woman to go through her entire pregnancy showing no symptoms yet she could deliver a baby with microcephaly.

She said: “So we need now to be testing these individuals as well as individuals who are in hospital. We have said a lot about Zika being a mild disease if we compare it to Chikungunya where persons were crying in pain. Zika does not produce that type of pain. So individuals who actually reach the hospital and are admitted, we will need to investigate those persons to find out how Zika is presenting in our population because there is still a lot unknowns about Zika.

“ We’re still uncovering a lot of information in our updates about Zika. We have a lot of persons who present with just rash and because the fever might be so low grade they may not have noticed that they had a fever. So we’re basically now seeing how Zika is presenting in our population. But we continue testing. We are not testing everybody but we are testing priority groups and information has been sent out to the physicians, to the persons on the ground so they know exactly who needs to be tested at this point in the outbreak.”

The Medical Officer also state that the Zika Virus has been isolated in both semen and saliva though in saliva the quantities present are believed to be too small to factor as a mode of transmission. The virus however, has been proven to be transmitted through sexual intercourse via the semen of an infected man.