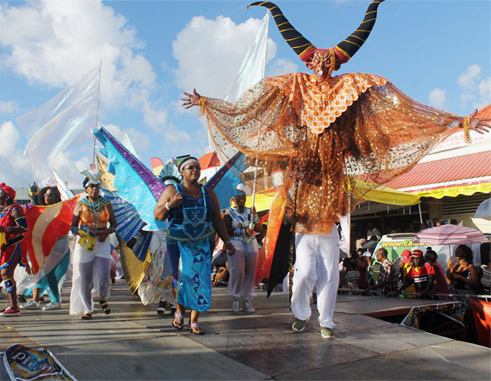 THIS year’s Carnival season wrapped up last Tuesday following the two-day Parade of the Bands. However, despite some big wins for some, there were a few regrettable losses.

The long weekend began on Friday with WilrockLaborie Steel Orchestra “steeling” the show at Panorama, amassing 256 points for the performance of Groovy Monarch, Arthur’s 2015 hit, “(Who I Am) West Indian”, to dethrone multiple-winning orchestra and defending champs, Pantime Steel Orchestra, who placed second with the song, “Captain Sammy”.

PantasticMuzik, Pan Ambassadors and West Coast Steel rounded out the three remaining spots in a competition that saw only five bands competing, a far cry from the high numbers in previous years.

On Saturday, Menell won her fourth calypso title with the songs, “Rivers of Blood” and “People Power”, after delivering two strong performances. The first song was penned by veteran costume designer, Dylan Pitcairn, who said he had the idea for the song over 15 years ago.
Sponsored | Article continues below

Seven-time monarch, Pep, placed second after taking a long hiatus from competitive calypso. He sang “Uncle Sam” and “No Means No”, the latter addressing the high incidents of rape of late.

Islah Man won his first-ever party soca title on Sunday at the Groovy and Party Soca Monarch. Performing the season hit, “MaddMaad”, the artiste, known for his incredible stage antics, closed out the competition, especially when he brought his pregnant girlfriend on stage, put the microphone on her stomach and – with the aid of sound effects – had his unborn child sing part of the chorus.

The team of Ricky T and Superman HD – who won the competition last year — placed second with “All Hell Break Loose” while Ambi and Qpid placed third with “Election Kanaval”.

Sponsored | Article continues below
In the groovy soca category, Arthur scored a three-peat with his song, “Dat Beat”, making him the first and only groovy soca artiste to win the title three consecutive times. Qpid seemed pleased with her song, “Happy”, placing second while the trio of Ezra, Scoobay and Jiggy placed third with “Swim My Way”.

The carnival festivities were overshadowed on Sunday evening after band leader of Just 4 Fun Carnival Band, Andy Delmar, perished in a vehicular accident on the Millennium Highway. Delmar, who was the Managing Director of 1st National Bank, was one of two people who lost their lives over the weekend via a similar fate.

This year’s j’ouvert festivities were cut short moments after it began when around 6:00 a.m. police stopped the proceedings after incidents of violence broke out, including one young woman being stabbed in her chest.

Later on Monday, however, eleven bands took to the streets to show off their sections and impress the judges. Despite Monday and Tuesday’s Parade of the Bands experiencing intermittent showers, thousands of revellers turned out to enjoy the last days of a carnival season that was overshadowed by a general elections campaign that ended on June 6.

Sponsored | Article continues below
Meanwhile, Tribe of Twel scored a two-peat by winning Band of the Year with their portrayal, “Paradisio – Journey to Joy and Glory”. RoyalitesXtreme placed second with “Heroes or Villains” while Just 4 Fun placed third with “Savage”. In fourth place was Taboo portraying “Cosmos – Essence of the Coalescing Zodiac”.

Tribe of Twel made a clean sweep of the first three spots in the Individual of the Year category with Adrian Augier winning with “Ascension”, Tanisha Nicky Williams placing second with “Swing Low Sweet Chariot” and Sharon Tanner placing third with “Lotus: Blossom of Joy and Tranquility”. Cidrick Laurent placed fourth with “Tru Tones at Palm Beach”.

There was a tie for the Section of the Year title: RoyalitesXtreme (“Pancho Villa”) and Tribe of Twel (“Earthly Angels”). Taboo (“Cancer & Scorpio”) and Red Rebellion (“Sparta”) tied for third place.

Insaniti Carnival Band picked up the title for Mas on the Move with RoyalitesXtreme placing second and Just 4 Fun and Tribe of Twel tying for third place.

Due to the early stoppage of j’ouvert festivities, the Carnival Planning & Management Agency (CPMA) said a decision on rewarding JOuvert bands will be made shortly.

Director of Carnival, Teddy Francis, said the CPMA was pleased with how the Carnival season eventually evolved despite the slow start. He said the events were well-organized and reiterated the pledges being made by the new government to inject more funding into the annual event so as to make the festival more attractive.

“We seem to be getting closer to the balance in the richness of our festival for its own intrinsic value and also getting touristic appeal,” Francis said yesterday. “We’ve seen almost record numbers this year of people coming to the festival from throughout the region and beyond.”
Share this post: