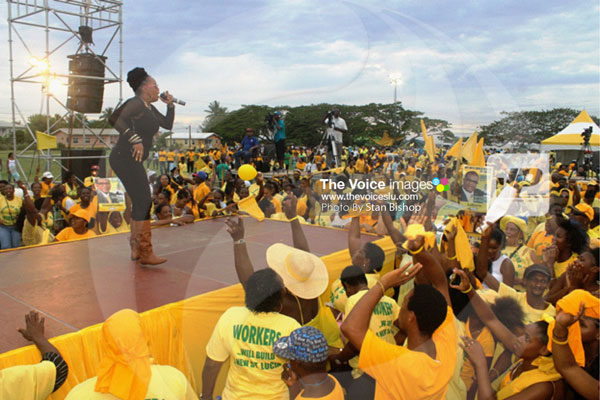 WHETHER or not you choose to admit, music played a major factor in the outcome of the June 6 general elections. Granted that many people felt disenchanted with the last administration and felt that an Allen Chastanet government should be given a five-year chance, the power of music to communicate the message to the masses should not be understated.

As early July last year the irascible Castries South-East MP, Guy Joseph, duked it out verbally with then House Speaker, Peter Foster. Emanating from that explosive exchange of words was Joseph’s now-infamous phrase, “Since when that’s your role?”

Joseph’s phrase has now been popularized in song, remixed and packaged as part of the national tradition. It’s also a catchy and straight-up full stop that many find pleasure in using when they think people are being too authoritative. It puts “How is me, uh?” to shame.

As for Joseph, what might have been blurted out in a fit of anger in the House of Assembly that fateful day in July has actually become his campaign slogan. He uses it on his tee shirts, his pickup truck and even on various platforms whenever he speaks. During the last election campaign, he almost wore it out.
Sponsored | Article continues below

That a phrase many people found insensitive when used to address the House Speaker could work so many miracles for a politician vilified by his opponents might seem baffling to many. However, history has shown that the power of music can popularize anything, good or bad.

Take, for instance, the songs Invader performed on the Labour Party’s campaign trail, “You Can’t” and “I’m Voting Labour”. From the moment party supporters heard them, it seemed that the election results were signed, sealed and delivered in the Labour Party’s favour. Then from nowhere Ashanti emerged with the Flambeau clapback, “Bye Bye, Kenny”. The race was now a dead heat.

The first time I heard the “yo pé” catchphrase was when Stephenson King used it on the William Peter Boulevard at a UWP public meeting. It was on the same day the Prime Minister was due to present his Budget Address and, after Parliament ended prematurely the day before, both political parties held respective public meetings, with the SLP hosting theirs in Choiseul.

Paraphrasing King, the SLP had skipped town and ran to Choiseul. “Yo pé,” he shouted on the microphone before announcing June 27 as the due date for general elections. Within a few days, then Prime Minister Dr. Kenny Anthony showed that neither he or his party was scared to ring the election bell, eventually showing courage on May 19 by announcing the June 6 poll date.

But, like the “since when that’s your role” phrase, “yo pé” (or, they’re scared) also made its way into song with Ricky T popularizing it in one of his soca offerings this season. In the song, Ricky T calls out names of candidates who were supposedly scared in the run-up to the fateful elections date. Even Menell made her own “yo pé” song the UWP’s campaign anthem. Moreover, “yo pé” soon became “yo ped” (or, they lost), used especially by UWP supporters who still cannot seem to be modest with their win.

The services of local calypsonians and soca artistes were so much in demand during the campaign season that some calypso tents had to either reschedule band rehearsals and/or tent shows due to many artistes performing at political rallies. Save for Gypsy who performed at Bradley Felix’s launching in Choiseul, the all-star, all-local cast seemed good enough for keeping the people’s excitement levels up and candidates’ chances of winning positive.

I say all this to emphasize the point that our local artistes have been making every year: that not enough support is being given to the development of the creative industries despite their growing importance. True, some inroads have been made in that regard. However, the disparity between the financial and other support the Saint Lucia Jazz & Arts Festival gets compared to Saint Lucia Carnival is too off-putting and insulting.

In fact, the Saint Lucia Jazz & Arts Festival gets so much financial support that even organizers of the event repeatedly refuse to disclose to the media just what that quantum is. But ask any tent leader what financial support they get for hosting shows and they will disclose it without hesitation, even adding that they deserve more.

This year has seen a high number of new talented youngsters enter the calypso/soca arena, many of whom show promise for a bright future in the music business. They include Saralee, Nilker, Flawless, Jay and Bronxx, to name a few. They are joining the fraternity at a critical juncture when the support their fellow predecessors in the profession have been clamouring for seem to be in its nascent state of another revival.

One of the pledges Prime Minister Allen Chastanet has made thus far actually relates to the support calypso/soca music, and by extension, Saint Lucia Carnival, desperately needs. Chastanet announced at the UWP’s victory rally in Micoud on June 12 that his administration will concentrate heavily on growing the Carnival product by investing more resources into the annual event.
A regular at the calypso tents over the years, Chastanet has taken in a laugh or two from the witty calypsos that often permeate the National Cultural Centre. In fact, he got another dose of just that last Saturday evening when he attended the TOT/Soca Village Pre-Father’s Day show in his capacity as Prime Minister. Ostensibly, Chastanet wants to be seen as staying true to his commitment to supporting the growth and development of our arts and culture.

To his credit, Chastanet was the Minister for Tourism under the last UWP administration who introduced the $1 million annual contribution to Saint Lucia carnival. While his successor, Lorne Theophilus, another diehard Carnival supporter, tried his utmost to ensure that things rolled smoothly in accessing those funds, there always seemed to be a problem with the highbrow honchos at the Ministry of Finance finding no justification in dishing out money for people to jump in the streets.

One needs only to analyze carefully the economic impact survey for Carnival done a few years ago, the findings of which certain people do not want to become public knowledge. According to reports, the economic spinoffs of Saint Lucia Carnival far exceed the revenue invested into the nearly three-month long season. Compare that with the two-week Saint Lucia Jazz & Arts Festival on which a rumoured $10 million is spent each year.

The message is clear: Saint Lucia Carnival needs all the support it can get. What needs to happen, though, is the political will needs to be ever-present to ensure that that support is, well, ever-present, too.

While politics and calypsos might always be at loggerheads due to social commentary seemingly whipping politicians into shape, there can be no denying that politicians will always find something redeeming in a good calypso. Heck, even Pep is back into competitive calypso this season after throwing in his red political towel a few months ago!

As with all the promises this new government has made thus far, the government can count me among the many who will continue to remind them that such promises need to be fulfilled, including more support for Saint Lucia Carnival. Traditional sponsors are already drying up because they are being stretched thin by proposals from various organizations.

By the way, I came across a short article in this newspaper last Tuesday in which local hotels are offering travellers up to 50% off standard rates this Carnival season. Deputy Director of Tourism, Tracey Warner-Arnold, is quoted in the article as showering praise on the event that many argue pulls more tourists to the island than the Saint Lucia Jazz & Arts Festival.

“A visit during Carnival season is an experience unlike any other, where travellers have the opportunity to become immersed in the Saint Lucian culture one song at a time,” she said. “As Carnival continues to grow in popularity, the Saint Lucia Tourist Board, in conjunction with our hotel partners, are primed to welcome visitors from across the globe.”

I concur with most of that statement by Warner-Arnold. However, I must repeat my disappointment that the carnival element was virtually lacking at this year’s Saint Lucia Jazz & Arts Festival compared to previous years when the carnival element actually enhanced that festival. But Warner-Arnold is absolutely right: visiting Saint Lucia during Carnival season is, well, let’s just say there’s nothing sweeter than that.

With the “quarters” stage of the calypso season commencing last evening, be sure to take in a few of the shows leading up to the Calypso Monarch. Also, the soca train is revving up nicely with artistes preparing for the preliminary rounds for Party and Groovy Soca Monarch. Go out and support our talented artistes.

If you asked me, we can only get out of Saint Lucia Carnival what we’re willing to put into it. There’s nothing magical about the machinations that go into preparing for such a lengthy season. If there’s no clear and supportive structure and people are too scared to put their money where their lip service is, then we all lose a good product that keeps getting better each year. So immerse yourself in the music one song at a time. After all, since when is it not your role to claim and be part of what’s rightfully yours?

In closing, the Prime Minister himself influenced another calypso while on the campaign trail. In lamenting the socio-economic problems faced by many Saint Lucians, it was not surprising to hear him blurt out “mwen faché” (I’m vex), often at the goading of party supporters who took delight at his often mispronunciation of the phrase.

This week, Ambi will be going before the judges in the quarterfinal stage of the calypso monarch with one of his songs entitled – you guessed it – “Mwen Faché”. If Chastanet does not deliver on his promises to Saint Lucia Carnival, a lot of people will be vexed.