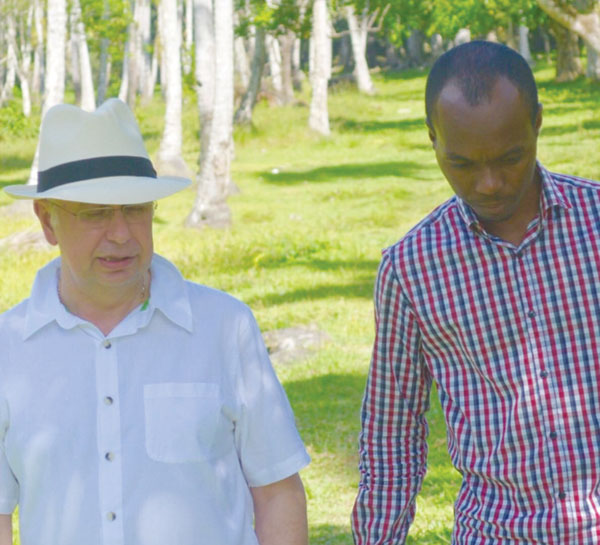 SAINT LUCIA’S new Minister for Tourism, Dominic Fedee, has hit the ground running by visiting Boka Group’s property at Belvedere Plantation, near Canaries, the location of the Island’s first Citizenship by Investment Approved Hotel development as, his first task since assuming office.

The Minister accompanied Boka CEO, John Kennedy, to the site, which also sits in his new Parliamentary Constituency of Anse la Raye and Canaries.

Kennedy said, “I am pleased that the Minister and I have had occasion to discuss this project on-site and in some detail and am encouraged by the priority that he has pledged to help us deliver new room capacity for the Island. We have a common goal of increasing the number of five star rooms offered to the international market and at the same time creating new local employment.

“Belvedere Plantation will preserve the historic Mahaut Estate, with only 9 percent low-density build, and 91 percent of the property remaining as an active plantation, providing up to 800 jobs for our neighbouring communities in Belvedere, Bouton, Canaries and beyond”. Kenny said that as the first approved CIP Hotel project in Saint Lucia Boka wanted to look at every opportunity to make Belvedere Plantation as attractive as possible to discerning global travellers.

He said: “During my meeting with Prime Minister Chastanet, last week, I conveyed our commitment to bringing new room capacity into the market as soon as possible and to working together for this common objective, in the interests of both our investors as well as the local work-force”.

Tourism Minister Fedee was quoted in a Boka Group press release as saying: ”Our government has already pledged its support for this project. We need more rooms and this development is going to be one of our prime products in Saint Lucia. This site gives the developer a tremendous opportunity to create one of the best tourist concepts in the world and this will be a show-case development of Saint Lucian diversity.”