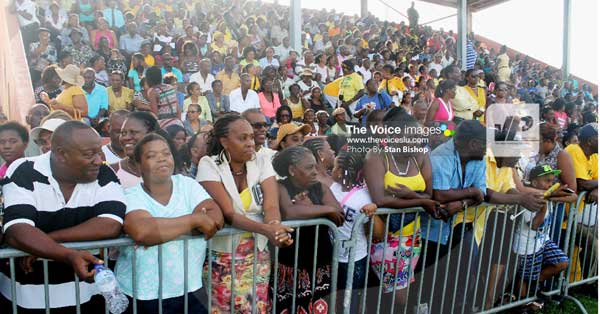 A NEW 15-member Cabinet of Ministers to manage the affairs of government was sworn in last Tuesday afternoon at a ceremony held at the Phillip Marcellin Grounds in Vieux Fort, and immediately went to work.

Hundreds of supporters and well-wishers formed lengthy lines outside the stadium as they filed in to witness the unprecedented public swearing-in of a Cabinet of Ministers. Scores of diplomats, invited guests and other members of the public crammed the pavilions and other seating accommodations on the playing field to take in the historic moment.

Tuesday’s ceremony commenced with the playing of the national anthem, followed by opening prayers and worship chorus. Thereafter, Governor-General Dame PearletteLouisy proceeded with the issuance of warrants of appointment to the Senators and Members of Parliament forming the Cabinet, who later took the Oath of Allegiance and Oath of Office.

In his 35-minute address, Prime Minister Allen Chastanet said his decision to reduce the number of ministries from 14 to 8 was so as to create clusters of teams to focus on critical matters affecting the nation. However, the new Cabinet size has already drawn the ire of some who say that reducing the number of ministers seems more prudent.

Chastanet also defended his decision to host the event in Vieux Fort, telling the gathering that “the south has suffered for a very long time.

“(The south has) the highest level of unemployment and poverty but yet the greatest opportunity for growth,” the Prime Minister said. “My Cabinet is here to say to you that we see you, we hear you, we are with you and we will make this thing change together.”

Chastanet pledged to be “firm but sensitive and responsive” to the views and concerns of Saint Lucians, adding that his will be a hardworking but caring government. He said he was anxious to get down to the job of building a new nation.

“The challenges are immense but with the support of the masses and the goodwill that we enjoy among the regional and international community, I am satisfied that in short order we will make a major dent in many of the social and economic problems besetting this country,” Chastanet explained.

“As a nation and a people, we must lean heavily on those qualities and characteristics that made us a unique Caribbean civilization,” Chastanet said. “If nothing more, I wish to be remembered as the Prime Minister that brought back the pride and sense of identity to Saint Lucians.”

Chastanet said that following meetings held with Ministry of Finance officials, he indicated to them that he wants to redo the budget immediately and aims to have a budget surplus, saying the country could not continue to borrow its way by putting young people in debt before they even left high school.

He said he is also looking forward to meeting with the Ministry of Finance’s technical staff in order to assess the state of the economy, following which the findings would be made public. Pledging to not embark on a political witch hunt, Chastanet said Saint Lucians needed to know what the state of the public purse was as at June 6, 2016.

Chastanet said his government will craft plans to address the more pressing concerns affecting the country by drawing upon the collaboration of key players in the economy, including the labour and private sectors.

Also present at Tuesday’s swearing-in ceremony was a team headed by President of the Florida Caribbean Cruise Association (FCCA), Michele Paige, with whom Chastanet and other Cabinet ministers are expected to hold talks with this week towards the establishing of a cruise ship pier in Vieux Fort. He also pledged to work with the FCCA to ensure that more Saint Lucians gain jobs on cruise ships.

Meanwhile, businessman Nicholas Barnard said he expects the new government to keep their promises to the people. He told The VOICE that a reduction in the VAT rate and a focus on health care and attracting foreign investment to create employment should be among the government’s priorities within its first 100 hundred days in office.

“The VAT issue is a terrible issue for us,” Barnard said. “Basically, we have huge receivables and have to pay the government before we get those receivables in. So lowering the VAT rate gives us a great ease on cash flow. Realistically, we need at least a 2-3% reduction in the VAT rate because I don’t think the government can afford to reduce it further since they would have to look at other avenues of generating revenue.”

Another attendee at the swearing-in ceremony, GillandAvril, believes the break from tradition in hosting the swearing-in in Vieux Fort was appropriate since it gives people a chance to witness how the principles of governance work. He also lamented the absence of immediate past officials from the Labour administration at the event.

Avril described the composition of the Cabinet as “interesting”, adding that “there seems to be a serious focus on things like job creation, innovation and entrepreneurship.”

“It looks good. However, I’m just waiting to see what they will do not just in the first 100 hundred days but throughout their five-year term,” Avril told The VOICE.