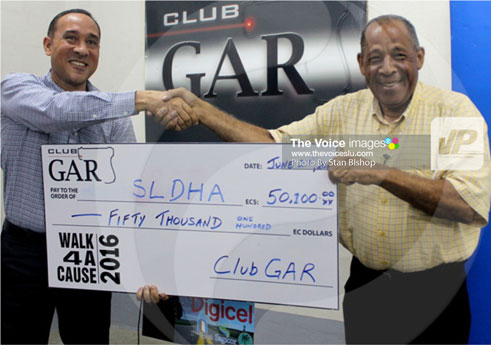 THE St. Lucia Diabetic & Hypertension Association (SLDHA) now has an additional $50,100 in its coffers to aid in its fight against diabetes.

Last Thursday, SLDHA President, George Eugene, was all smiles as Club Gar officials told him that they had raised that dollar value for his association at their May 29 Walk 4 A Cause.

The annual walk is now in its third year, with the $25,000 raised in the first year going to the Saint Lucia Cadet Corps while the World Pediatric Project received $50,000 last year.

This year, the charity chosen was the St. Lucia Diabetic & Hypertension Association (SLDHA) and manager of Club Gar, Anthony Bristol, said that like the previous two charities chosen, this year’s was also very significant.

“The cause (of diabetes) is something that we really identify with,” Bristol said at the presentation ceremony held at Club Gar’s Bois d’Orange shooting range. “We have to make a difference in our society.”

About 1,000 people participated in this year’s early morning walk that began at the Vigie roundabout and ended at Club Gar, Bristol said, making this year’s the best turnout yet.

Prizes for a raffle, which is one of the walk’s key revenue generating mechanisms, were also presented last Thursday.

The $50,100 raised will be handed over to the National Community Foundation (NCF) which will act as custodian as per a Memorandum of Understanding. The SLDHA, however, can access the funds by submitting proposals for projects and other initiatives to the NCF.

Eugene said he was grateful to Club Gar, sponsors and walkers for singling out the SLDHA given the major battles the association faces in creating awareness about the dreaded non-communicable disease.

“We have a major problem in this country,” Eugene said. “Our concern at the Association is that too many young people between 10 and 15 years are getting Type II Diabetes, which we thought was an older person’s disease. This is caused by lack of exercise and improper diet.”

Eugene said a 2005 study found that 28% of Saint Lucians showed signs of pre-diabetes, meaning that their blood sugar levels were higher than normal but not high enough to be diagnosed with diabetes.

However, people with pre-diabetes are at a higher risk of developing Type II Diabetes and other serious health problems, including heart disease and stroke.

Eugene said what is also needed are programmes targeting preschoolers by teaching them about the effects of diabetes. The earlier the message gets through to people, the better, he said.

“We need to do these kinds of things: more walks, change in diet and change of habits. Too many people are being amputated and too many are on dialysis. It’s really, really serious,” Eugene explained.

According to Eugene, more than 80 people who need dialysis currently have no access to such treatment due to a shortage of either dialysis machines or untrained staff to administer such treatment.