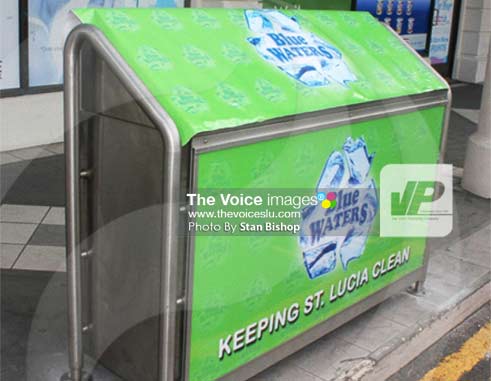 Sponsored
Share this post:
THE fight to stem Saint Lucia’s garbage problem by bolstering the recycling push recently got a shot in the arm with the introduction of a new project.

Ecomedia, initially based in Canada, recently set up shop in Saint Lucia with the hope of doing its part to keep the environment clean. Company spokesman, Thomas Amedee, told The VOICE that the ongoing practice of plastic bottles and aluminum cans being discarded indiscriminately prompted the company to take up the challenge here.

“Since these items are tossed on the streets and end up in the rivers and gutters, we decided to launch this project in Saint Lucia at virtually no cost to the government or those partnering with us,” Amedee said.

Thus far, the Blue Waters bottling company has been the only local company to sign on to the new initiative that would see regular garbage canisters being replaced by better-designed and aesthetically-pleasing stainless steel units that come with slots for newspapers, plastic bottles and glass bottles to be placed.

The outer surface of the bins offers space for advertisers, thus allowing companies to be identified with being environmentally-friendly. Those advertisers will pay a small fee for advertising space. Amedee said the project is an inexpensive method of introducing a new way of thinking towards the disposing of waste, bottles, in particular.

“We decided to approach a number of companies to join with us because everything has a little cost associated with it, as well as benefits,” Amedee said. “We looked at some of the more high-profile bottled water and soft drink companies since the general consensus is that these companies are major contributors to the indiscriminate dumping of bottles, which may not necessarily be true.”

Last Sunday, the first three units were installed at J.Q. Rodney Bay Mall;.Amedee said the general idea is to collect the garbage in separate sections of these units, sort it and deliver it to local exporters.

Currently, there is no set return policy or incentives for returning discarded plastic bottles, resulting in not much emphasis being placed on proper disposal. While the J.Q. Rodney Bay Mall pilot project represents a small dent in the recycling drive, Amedee said the aim is to make the project a national one.

With Blue Waters already demonstrating its commitment to the drive, Amedee said Ecomedia is hoping to encourage other companies to come on board. Ecomedia, he added, is also hoping to re-educate the public on the need for better garbage disposal habits through public service announcements (PSAs), radio appearances and newspaper articles.

“We are concerned with the amount of waste we see floating around whenever there is a heavy downpour, including in the Castries Harbour. So I’m sure that all companies are concerned about that and would make an effort to play their part,” Amedee explained.

Recently, Minister for Sustainable Development, Energy, Science and Technology, Dr. James Fletcher, renewed his call as it relates to indiscriminate littering, saying the effects of climate change are linked to the scourge.

With the Returnable Containers Bill yet to be enacted, there is growing concern that more can be done from a legislative perspective to arrest the litter problem, thereby promoting recycling. However, many people contend that keeping the environment clean depends on people’s understanding of the seriousness attached to saving the planet.