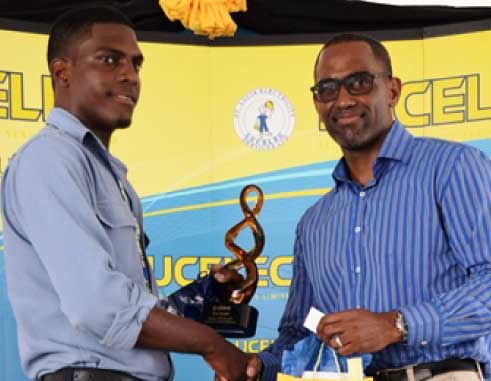 IT was a day of celebration for employees of St. Lucia Electricity Services Limited (LUCELEC) as the company recognized the achievements of staff for end of year 2015.

When it comes to identifying the individuals and teams who went above and beyond the call of duty, LUCELEC’s annual staff appreciation ceremony has built a reputation for leaving no stone unturned. Over 50 employees were recognized in late April for their outstanding achievements in various categories including Long Service, Department of the Year, Supervisor of the Year, Employee of the Quarter and Employee of the Year.

Speaking at the ceremony held at the company’s Cul-de-Sac facility, Managing Director Trevor Louisy, lauded staff for their individual and collective efforts in helping the company accomplish its goals in the previous year, and encouraged them to continue to give their best.

“As with every team that does well or wins, there are players who stand out, either for their all-round solid performance throughout the game or moments of brilliance through a particular passage of play. And while they receive special mention, they could not have done well without the team. If we purposefully aim to be the best at what we do individually, this individual energy that we bring to the job can be harnessed to provide the synergy required for the company to excel, not just for this year, but for well into the future,” he says.

The LUCELEC Awards Committee was able to maintain a fun and interactive atmosphere throughout the proceedings with a combination of song, dance and drama performances by staff.

Chairman of the LUCELEC Board of Directors, Stephen Mc. Namara, also shared a few words of encouragement to staff.

“Those of you who have put in the effort but haven’t quite gotten to the awardee position, fear not your time will come and you can take satisfaction from the fact you have contributed to the place that this company holds not only in Saint Lucia but in the entire Caribbean,” he says.

The LUCELEC Staff Appreciation Ceremony was held under the theme, “Recognizing the individual contribution of the energy behind our synergy.”