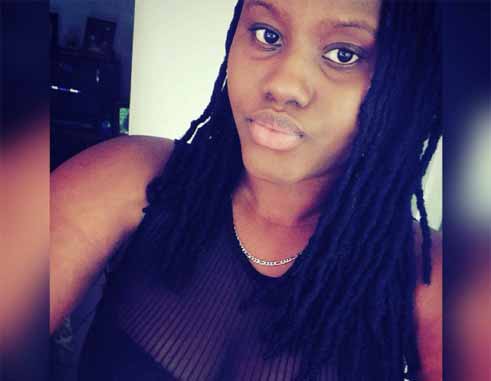 TODAY’S FITC is from the Marchand Boulevard and although she migrated to the north of the island at the age of 12, she will never forget where she came from and is in fact proud to shout it out for the world to hear.

Shenelle Herman is a 23 year old businesswoman who to many is extremely reserved and introvert but today she tells The VOICE that there is a reason behind her personality.

She says she enjoys life just like the rest of us but just takes time to quietly observe the world and the people around her.

Herman who is also an avid poet and carnival lover says her upbringing has taught her that life and everything in it must be cherished but at the same time, one must tread carefully as you can never know what fate is waiting for you around the corner.

She gives a candid look into life in the ghetto and attempts to open the eyes of the masses who think that nothing good lives or comes out of such neighbourhoods.

The VOICE: There is a stigma of violence and danger attached to the “Ghetto” Marchand Boulevard, but you were raised there and turned out just fine. What are your thoughts on the perception of the place you once called home?

Shenelle: I’ve experienced it personally, like when people ask me where I’m from and I tell them the Marchand Boulevard, they immediately tell me “Oh, so you’re ‘rorocious’ and tough and rude” and I’m like hey, don’t categorise me. Yes, Marchand is known for crime but there is more to Marchand. There are families and there is unity. People just see you coming from the area and one time they think you’re a “bad gyal” and I’ve never even been in a fight in my life, I’ve never been involved in what people call “roro”, I went to the St. Joseph’s Convent and then up the Morne. My mother raised me inside properly. Yes I was raised in the Boulevard but I had a tight family unit. People sometimes ask me if I’m sure I’m from Marchand and I’m just like “What’s wrong with Marchand?” Just because there are some people involved in crime, that does not mean that everybody is involved in crime…there are many people who came from Marchand and went on to do extraordinary things but we don’t hear about them, we just hear about the crime. At the end of the day, crime is everywhere so they shouldn’t stick it on Marchand only. You will look at me like the “Bad Gyal” but no I’m not, I’m actually working hard to reach somewhere in my life. That’s why even if I left Marchand at a young age, simply because I live at Corinth, I can tell people that I’m from Corinth but I make sure to say I’m from Marchand but I live in Corinth because I want them to know where I’m from and I’m not ashamed of it… I liked Marchand. My grandmother and quite a few other relatives still live there and I have no problems going there. I have never felt unsafe.

The VOICE: When you left Marchand at the age of 12 and moved to Corinth, what was it like for you making the adjustment?

Shenelle: I did not like it. When I found out I was leaving, I cried so much because I did not want to leave there to go to Corinth but eventually, I got used to it. I was used to seeing people on the road outside and when I went to Corinth it was just silence. It took me about a year to get used to it because after I left, I would still go there every day after school but I got over it.

The VOICE: Give me a few examples of the negatives and positives that you’ve seen in the Marchand Boulevard.

Shenelle: In terms of negatives, I’ve seen some girls from a young age get involved with the guys in the area because that’s what they see. Also, there are young guys who, even though they have gone to school, they end up sitting on the block and waste their lives away. With the positives, I will use myself and a few young ladies that I see around Marchand as examples of those who broke the mould. I think Marchand makes you strong. I think just being from there, you have to have strength and people associate that with rudeness etc. but it’s actually strength because you see how people have struggled and you see how they have overcome it so I think Marchand teaches you to be strong through struggle. I think it also brings wisdom because when you come from a place like Marchand and you succeed in life, you have basically lived both lives, so now you’re wiser. Whilst you weren’t born with a silver spoon, when you do get that wealth, you can appreciate the smaller people and things in life.

The VOICE: By all assumptions, you should have been chilling out on the block with two to three children. What went through your head to make you choose a different path?

Shenelle: I will say the same thing for my family because the majority of us who have lived and still live in Marchand have taken the right path. People actually said that I would have disappointed my mother in time by having children at a young age and be on the streets, involved in drugs, because they felt that my parents used to spoil me too much. They thought I was too “in it” in the Boulevard and people though I would have embarrassed my mom but I think seeing my mom and, my grandmother and my aunties, I saw that they were good women and in the end I wanted to be a good woman too. So that’s why I’m 23 years old, I don’t have any children, I don’t do drugs and I don’t hang around on blocks because it’s all about the family. The family I grew up with in the Boulevard was close and had only good women. I was raised in that, that’s what I saw and grew up in and that’s what I knew was right, so that’s why the Boulevard didn’t affect me negatively because there was only positivity inside my house.

The VOICE: Whilst there was only positivity inside your house, it is no secret that violence takes place on the outside and I’m guessing that you have witnessed some of it. Could you give me some accounts?

Shenelle: There were days and nights when I would be in bed and there would be gunshots right outside. There was this one time when I came from the supermarket with my mother and we passed a woman who lived in the area. By the time we passed her and entered the house, she was shot. Obviously, Marchand has violence but I was so used to it. Some people from outside of Marchand would hear gunshots and they would try to run but I was so used to it that it became background noises to me

The VOICE: As a young lady (focusing on the ladies right now), when you look at the others who still live in the Boulevard who have somewhat submitted to the stigma and live the lives that outsiders expect them to live, what would you say to these girls, seeing that you were born and raised in the same place as they were yet you are breaking the mould?

Shenelle: I think it has to do with loving yourself. Now I’m not going to say that they don’t love themselves but the advice I would give them is to cherish themselves more. I believe that because they were raised there and they’re seeing it happening, they think that they just have to be that way but you have to expect more from yourself. So if your self-esteem is high and you’re expecting more of yourself knowing that you’re a queen, you won’t just say: “Ok I’m from Marchand and I’ve seen my cousins or sister do it so now I’m going to do it”, you’re going to say: “Well, I’ve seen what they’ve been through and so I’m going to try to be better”. That’s what I would tell them. I would also tell them to focus on being better than what you’ve seen and what you’ve been raised in instead of just submitting yourself to basically being a “bad gyal”. If you understand yourself and you know your worth, at the end of the day you will know that you can do better. Just tell yourself that you are worthy of more and you’re better than that life. I think fear has a part to play in this you know?! Because they’re so afraid of stepping out of that life when it’s all they know but they shouldn’t be scared, they’re supposed to be strong. With strength, you can do anything and they need to focus on that strength.

The VOICE: You will find bad seeds everywhere that you go but how do you feel when you see the ones in Marchand behaving the way that they do?

Shenelle: It’s unfortunate because they make everybody look bad because now some people are actually scared of entering the Boulevard because they think that there are lots of “bad boys” there and that’s actually what they (the bad boys) want to portray. They’re giving the neighbourhood a bad look because they could be doing more with their lives than hurting and harassing people. But at the end of the day, I still don’t think the entire place needs to get judged by those few bad seeds because when you look it, everywhere has bad seeds. You can be in Castries right now and there are places that you will not want to go so it’s not only Marchand. At the end of the day, the bad seeds made it what it is but people need to source out the good instead of focusing on the bad only.