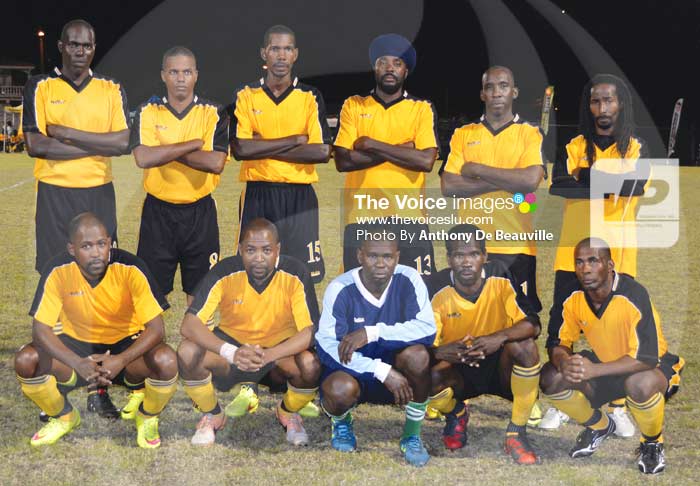 DEFENDING champions Caricom Masters suffered a shocking 2-1 defeat to home team Soufriere in the quarter-finals of the Veterans Football Tournament played at the Soufriere Mini Stadium on Saturday evening.

Roger Celestin put Caricom Masters ahead in the 26th minute of play with a well driven low shot, but David Ramjeawan found the equalizer for Soufriere in the 41st minute and that’s how the score line remained up until the half time whistle of Referee Leo Clarke.

In the second half the run on and off of substitutes was also visible to keep up the fast pace game on the square. But it would be Soufriere captain No.10 Jerome Serville who would seal the deal with a well struck right footer that eluded the Caricom Masters custodian to hit the back of the nets.

With three minutes added time, Soufriere was in all defense mode, while Caricom Masters came firing from all angles to get the equalizer, but that was not to be as the final whistle went, 2 -1 in favour of Soufriere.

Michael Eugene Manager for the Soufriere team and president of Veterans Football in Soufriere spoke to The VOICE following the encounter.

VOICE: Sweet revenge for you this time around?

Eugene: “Revenge is always sweet; I recall I told Alvin Malaykhan that as long as its home you coming, we will always have revenge at the back of our heads and tonight it proved dividends. We are the true champions”

Eugene: “We were down 1 – 0, we came back and equalized. We came back with a purpose, with more energy in the second half and it paid off”

VOICE: What was discussed in the dressing room at the half time whistle?

Eugene: “In the dressing room we said we had to come more aggressive, try and get an early goal to maintain the lead and it worked in our favour. Congratulation to the boys”

VOICE: What you think about the quality of play this evening despite the rain?

Meanwhile, in the first encounter Congorians defeated Vieux Fort South 1 – 0. No.17 Kenton Vitalis put Congorians ahead in the 41st minute and that’s how the score line remained up until regulation time despite VFS efforts in trying to get the equalizer.